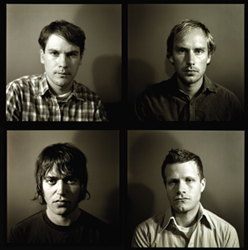 My friend left Spaceland this last Saturday before the Grails even started. So I was able to order a coffee, sit in the back and let the seductive wall of sound that is the Grails seep into my consciousness.

For about an hour and a half, I was treated to a mostly melodic sort of rock and roll peppered and spiced with synthesizers of sorts.

Some sharp guitar riffs and poignant drumming confirmed that this was rock, but there was no small talk from an ego-infested frontman, and the band from Portland, Ore. was able to instill the crowd of 50 or more with a collective calm.

There was a positive glow in the audience after the Grails completed their encore performance, and I couldn’t help but be reminded of a Sigur Rós show I attended about five years ago in San Francisco as the mellowed out but enthusiastic crowd responded the way they would to a nice afternoon play or a symphony orchestra – with warm applause and a few cheers.

I would typify the Grails as part rock, part meditation music, part massage music – as it relaxed me to a point where I was thinking only nice, positive thoughts as I left Silver Lake.