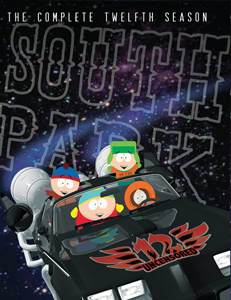 “South Park” is as good as it has ever been in its 12th season. Primarily responsible for this is how much more topical the show has become due to the show’s incredibly quick production time (six days), which is documented in the set’s extra features. Even more amazing is that every episode is still the brainchild of the same two guys who have been doing it since the beginning.

2008 was a big year for Nazi films, but if you’re looking for an original take on a WWII story, check out Enemy at the Door. The British series, premiering in 1978, is an exceptional drama about the Nazi occupation of the Channel Islands, detailing the lives of the civilians and their occupiers alike. It also features the debut of “Buffy”’s Anthony Stewart Head.

“Ragnarok: The Animation” is a somewhat stilted adaptation of the popular online game, replete with all of the tropes of fantasy RPGs. With swords, magic and monsters you can almost see the battle scenes unfold in the turn-based combat of a video game.

From the creators of “Fullmetal Alchemist” comes Kurau Phantom Memory. Kurau was once a normal little girl. But after a comic book origin story-style accident, her body fuses with an otherworldly life form, imbuing her with special powers. Ten years later, she is a kind of corporate spy for hire. It’s an action packed series set against a cool Blade Runner-esque future landscape.

Paul Rudd and Seann William Scott star in Role Models, a comedy from the team behind Wet Hot American Summer. The two slackers are sentenced to community service at a Big Brother program and are paired up with an out of control kid and a helpless nerd.

Don’t go in expecting your typically raunchy Frat Pack fare. This movie’s audience is actually younger than the stars would suggest. It’s an enjoyable enough (if a tad formulaic) comedy, which scores a few good moments.

Edward Norton made a splash in his film debut with a memorable performance as an altar boy accused of murdering a priest in Primal Fear, now available in Blu-ray. In one of his best performances, Richard Gere co-stars as a hotshot defense attorney, along with Laura Linney and Frances McDormand.

Batman: The Motion Picture Anthology 1989-1997 includes the first four Batman films, beginning with Tim Burton’s excellent Batman and ending with Joel Schumacher’s abysmal Batman & Robin, which is worth viewing only to see how necessary Batman Begins was. The set comes loaded with 18 hours of bonus features.

The History Channel is releasing two megasets, The Founding of America and The ’60s, which cull their programs covering two of America’s greatest decades: the 1770s and the 1960s. Each offers about 28 hours of viewing (not counting extras) and includes interviews with Bruce Springsteen and Jon Stewart as well as performances by Kelsey Grammer and Jeff Daniels.

Patty Duke twice starred in a film adaptation of The Miracle Worker, the second time playing the part of Anne Sullivan in the Emmy-winning 1979 TV movie, from the play by William Gibson (yes, Mr. Cyberspace himself). The story follows the young Helen Keller, trapped in a deaf and blind existence, and the one person who reached out to her and taught her to communicate.