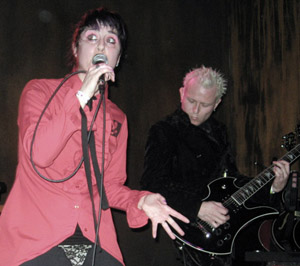 There’s a certain nostalgia that continues to linger for the ’80s when men were peacocks and women were still fierce, fueled by the frenetic energy of punk paired with a certain playfulness that has been lacking in the pop music of today. Roxy Epoxy (formerly of the synth-punk ensemble the Epoxies) and her new outfit, the Rebound, aim to bring back that eclectic mix.

The group hits the front stage at the Knitting Factory in support of its new release, Bandaids on Bullet Holes, with a confident, tongue-in-cheek set that recalls energetic new wave acts like Lene Lovich or Missing Persons. Throwing herself around the stage like a wobbly top, Epoxy kicks wildly and contorts her body, all the while yanking up the tights and the underwear that she sports on top of them with carefree abandon.

Later she reveals to the audience the cause of her panty-tugging compulsion: She borrowed the oversized ensemble from her bass player. Ah, the joys of touring!

Rhythmic songs like “Walls” carry well to the live stage, but other heavily vox-reliant numbers sadly suffered when Epoxy’s distinct vocal nuances were buried in the mix.

Although the jury is out for me on the Hot Topic brigade that is the Rebound, Epoxy’s authentic onstage antics make up for their seemingly prefabricated goth-appeal. As a frontperson she has a kind of humble, lovable honesty that drew in this intimate crowd of young misanthropes and left them begging for more.