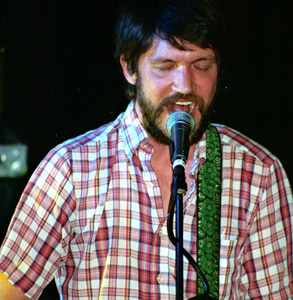 Despite that Cursive’s current tour promotes the brand new Mama, I'm Swollen, this Troubadour show really revolved around The Ugly Organ, much of which had revolved around the idea of recreating once-real pain to appease an audience.

Tim Kasher suddenly woke up during “Sierra,” and after this passionate fit of calling out to an estranged daughter, there was no option but to start over softly and gradually regain some of that energy expelled – so there was “From the Hips,” and there was the title track off Mama, to which Kasher danced a smidge, perhaps to add some grace to a room in which an old-fashioned pit had steadily developed.

It was awfully hard for Kasher to keep a straight face when someone broke the silence between his whispers with an occasional “Tim-may!” And though he had to set a somewhat slower pace in fingerpicking at the start of “The Recluse,” his guitar layered over that of Ted Stevens meant heavier songs like “Sierra” and “Art is Hard” sounded complete even without the cello of onetime member Gretta Cohn.

The performance on the whole was much larger than the tiny Troubadour, best demonstrated through Organ’s “Staying Alive,” a wall of noise which cooed in repetition “the worst is over” before Cursive came back down for a meaty encore. Band and crowd looked a bit worn by the time “The Martyr” came to be, but just as “Sierra” had woken Kasher, “Art is Hard” woke the crowd, suddenly apeshit – apeshit! – above lyrics that made us a collective character in song.