Looking Into Perception: Professor Studies How People Interact with Their Environment 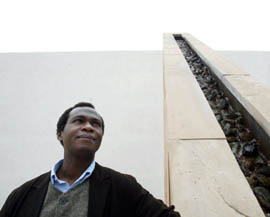 Professor Oladele Ogunseitan takes out a pen and draws four figures on a sheet of paper: a square, a circle, a triangle and a complicated squiggle.

When he was a kid, Ogunseitan, who teaches at the University of California at Irvine, was fond of asking people he met to rank the shapes in order of preference to predict how well he’d get along with them.

According to his test, someone who likes the square the best is an orderly, security-focused person; the circle, a gentler soul; the triangle, an aggressive sort, and the squiggle – his favorite – a creative type.

"We tell mental stories about shapes. This is the simplest form," he says of his childhood quiz.

Now a microbiologist and professor of social ecology, Ogunseitan hasn’t stopped studying people’s preferences. Only these days, instead of circles and squares on a page, he’s looking closely at how people feel about the world around them. It’s called topophilia, the "affective bond" that people feel for a place.

In his most recent research, published last month in the journal Environmental Health Perspectives, he offered proof that there’s a link between a person’s environment and his or her sense of well-being, an idea that scientists have long believed but hadn’t demonstrated. For the first time, Ogunseitan created a method to measure the strength of the relationship and identify the preferences of specific populations.

His researchers asked 379 people on the UC Irvine campus to rate certain features in the urban environment such as trees and flowers, a sense of spaciousness or privacy, and colors and sounds. He then asked them about their mental well-being, as measured by the World Health Organization’s Quality of Life survey.

When he crunched the numbers, he found the environmental features that ranked highest were flowers and bodies of water such as lakes and oceans, while buildings or landscapes with complex designs and lots of textures were perceived as less calming or restorative.

Seated at the Noguchi "California Scenario" Garden, an urban park bordered by mirrored bank towers in Costa Mesa, Ogunseitan says he envisions architects, landscape designers and planners using his method to create new public spaces that are healing and restorative to greater numbers of people.

"Maybe you have only five minutes to spend here; does it really do you any good?" he asks, amid the garden’s fountains and varied flora. "What my contributions do is show that this actually does help your quality of life."

While topophilia is a common and widespread phenomenon, theories about it have sparked intense scientific debate. In the 1970s, biologist Edward O. Wilson stirred up controversy by arguing that an affection for certain landscapes is part of mankind’s genetic makeup.

"For example, a fear of snakes is not really taught. Certain animals provoke a response in most people, not because they’ve experienced it before, but because in this collective history of human evolution, there’s some experience that’s shared."

Wilson’s ideas were later countered by biologists who argued that the human mind is less subject to the rules of natural selection than other biological attributes, and that social conditioning plays a large role in shaping behavior and preferences.

For his part, Ogunseitan believes that an interplay of both nature and nurture determines people’s preferences.

"I’m more likely to believe – and this is philosophy, there have not been actual tests – that the environment, the culture, the nurturing and the access to money, are playing on top of evolutionary history. There is a template, and there is a selection," he said.

Ogunseitan’s own research isn’t likely to stir debate within his field, but it may encounter detractors among architects and designers. One can imagine them balking at idea of creating a park or a public memorial with a scientific, by-the-numbers approach.

Even the Noguchi Garden, with its wide range of natural features such as cactus and agave in a desert landscape, a rock sculpture, a redwood-bordered meadow, a miniature waterfall and river, might not meet his formula for a restorative landscape.

"There will be architects who think this is putting architecture back a thousand years," he admits.

Offending architects was not what he had in mind he started the study. In fact, Ogunseitan feels something of an affective bond with the profession and its practitioners.

When he was a child attending boarding school in Nigeria, he spent all his spare time drawing and doodling, and was torn when he had to decide between the arts or science at age 12. He chose biology, in part because someone told him he could use his drawing skills in the natural sciences.

Even after he earned a bachelor’s degree, he was still drawn to the arts and applied to Columbia University’s graduate architecture program. He ended up earning a Ph.D. in microbiology at the University of Tennessee instead, but kept up with his artwork in his spare time.

Over the years, Ogunseitan has read a lot about how architects work, and he believes his research results will help rather than hinder their creative process.

"It’s rare for architects to have a blank check," he says. "There’s always someone saying, I want this or that. The process is always an exchange. I think the architect, the client and the user will benefit."