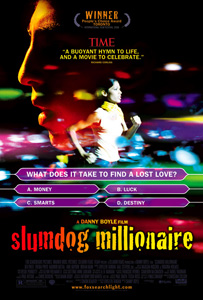 Some big Hollywood releases come to DVD this week:

Winner of eight Oscars including Best Picture, Slumdog Millionaire proved an unlikely hit. Danny Boyle directed the film, based on the Indian novel about a poor teen suspected of cheating on the Indian version of “Who Wants To Be A Millionaire.”

Twilight, the pop culture phenomenon of high school vampires, directed by Catherine Hardwicke (Thirteen, Lords of Dogtown). We’ll be seeing sequels for a decade or two.

Bond past and present comes to high-def. Quantum of Solace, the second installment featuring the divisive Daniel Craig feels like kind of a rehash of Casino Royale. And while everybody can agree on the first man to order his martini shaken not stirred, Sean Connery, Never Say Never Again, his 1983 Bond swan song, is a much debated entry in the 007 canon. Connery returned to the role after a 12-year hiatus, co-starring alongside the unlikely duo of Kim Basinger and Rowan Atkinson, while Max von Sydow played nemesis Blofeld.

William Eggleston: Photographer is a nice documentary short examining the great photographer’s career. Eggleston describes his highly influential work as “at war with the obvious.”

Each episode of “Urban Legends” (Urban Legends: The Complete Season One) examines three tales we’ve all heard and tells which are true and which are legend.

Il Generale Della Rovere, directed by Roberto Rossellini stars director Vittorio de Sicca as a rascally conman working in wartime Genoa, exploiting his fellow countrymen. When he’s captured by the Gestapo, he strikes a deal to impersonate a Resistance leader.

Polish filmmaker Andrzej Wajda’s Danton stars Gerard Depardieu as the eponymous character, who faces off in a war of ideologies against former revolutionary ally Robespierre during the Terror.

The second and final season of FX’s solid dramedy “The Riches” comes to DVD. British comedian Eddie Izzard and Minnie Driver star as the mother and father of a family of gypsy con artists who pose as a wealthy suburban family.

Also available: The IT Crowd: The Complete Season One, The Fugitive: Season Two, Vol. 2.

Jim Gaffigan may very well be the most unhip standup comedian around, and he’s not shy about admitting it – in fact, that’s pretty much his entire act. His new Comedy Central special King Baby features material ranging in subjects from laziness to whiteness. Gaffigan scores a few laughs, but his relentless self-deprecating springboard for bits wears thin, making you long for comedians such as George Carlin, Bill Hicks and David Cross who take on the world.

Love ’em or hate ’em the Yankees have played some great games in their storied history. The Essential Games of Yankee Stadium contains six full games spanning 1976-2003, as well as loads of extras.

Made in 1955, To Catch A Thief, while second-tier Hitchcock, is really all about the chemistry between two of the Master’s favorite leads: Cary Grant and Hitch’s muse, Grace Kelly.

The Odd Couple re-teamed cinema’s consummate mismatched pair, Walter Matthau and Jack Lemmon, with playwright Neil Simon for this 1968 comedy classic. Matthau and Lemmon play off each other effortlessly, a chemistry that they honed in 10 films together.

Both two-disc sets are loaded with extra features.