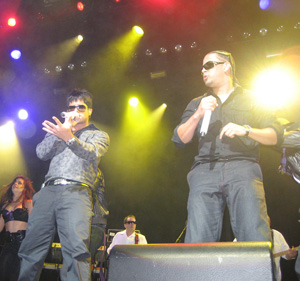 Latin Grammy-nominated R.K.M. y Ken-Y lit up the stage in style right from the beginning. The reggaeton duo from Puerto Rico had a sold out crowd on its feet until the last song performed, “Te Regalo Amores” (I give you a lot of love) from their latest CD, The Royalty.

R.K.M. y Ken-Y sang pieces from their previous three albums as well – Masterpiece (2006), Masterpiece: World Tour (2006) and Masterpiece: Commemorative Edition (2007). Dressed in black slacks, long sleeved buttoned dress shirts and sunglasses, the duo performed “Down,” followed by “Dame Lo Que Quiero” (Give me what I want). Both reggaeton songs set the mood for the rest of the show, which lasted a little over an hour.

Ken-Y did a solo performance of “Mis Dias Sin Ti” (My days without you), during which he played the piano. It was the romantic portion of the show.

A small band, highlighted of two electric guitar and base players, among others, accompanied the duo.