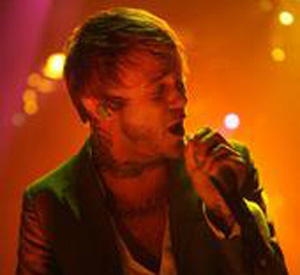 Any guy can pick up an acoustic guitar and act like he’s more attuned to his emotions than the average bear, but precious few can actually breathe life into a one man, one instrument show the same way they would with a full band behind them. Former Early November frontman Ace Enders might be an exception even to that rule, with his solo material arguably the best work he’s done yet.

Playing tracks from his new album, When I Hit the Ground, with selections from his past projects, Enders showed off a vocal range even veteran Early November fans might be surprised to find him packing. Emotive and impassioned, Enders displayed a raw honesty with each song, hitting a high point mid-set as he covered the Verve’s “Bittersweet Symphony.”

Having heard the acoustic versions of some of Enders’ newest songs, his touring band mates now have the unfortunate task of attempting to top these solo shows on their next tour. Though, when compared to Craig Owens having to walk on stage every night to follow Enders, that’s nothing.

Slightly awkward in his demeanor, Owens’ between song monologues were endearing, if a bit like stream of consciousness MySpace blogs read aloud. Nevertheless, Owens was ultimately charming and likeable in his soft-spoken musical vulnerability, a vastly different side of him from the stoic and dynamic stage persona seen while fronting Chiodos.

Far too often we tell musicians not to quit their day job when embarking on new or side projects, but as far as Enders and Owens are concerned, I think we can grant a pass for them to moonlight on these gigs.