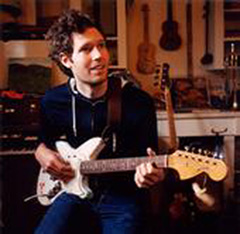 An added bonus to the Chad VanGaalen show was his equally interesting opening act. The uniqueness of their music is offset by the genericness of their band name, Women.

Even though their songs are filled with hissy waves of distorted guitar noise, their music lacks nothing in the finely crafted pop department. The added layers and textures of their live performance only enhanced what is clearly obvious in their debut album, these guys know how to bring it.

After Chad VanGaalen took the stage things quieted down a bit. Many of the songs he played were from last year’s Soft Airplane. His performance was not quite electronic and not quite acoustic. VanGaalen, in his albums as well as his live performance, presented his take on the singer-songwriter genre.

VanGaalen, who is from Alberta, Canada, blends a twee-like innocence with organic, often sad sounding songs. VanGaalen sang of death in “Willow Tree,” a Teenage Mutant Ninja Turtle mask in the aptly named “TMNT Mask” and a number of oddball topics. His performance was as interesting as it was endearing.