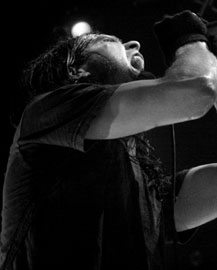 With the continued success of Punk Rock Summer Camp at the Vans Warped Tour, event founder Kevin Lyman created Taste of Chaos after deciding that some of the harder "screamo" bands needed a venue to showcase their talent. The tour blasted through Southern California March 31 crashing at the Long Beach Arena in Long Beach, Calif.

Arriving at Taste of Chaos about an hour and a half into the show, My Chemical Romance was already blasting through its set of some amazing goth punk rock. Lurking across the stage, lead singer Gerard Way carried the intense set with charisma and hard-edged confidence.

Commanding the audience to hold up their cell phones during the ballad "The Ghost of You," from the band’s new album Three Cheers for Sweet Revenge, Way created a new technological masterpiece as bright lights from phones and lighters glowed around the arena.

Way made sure the audience had a good time but kept it safe, urging audience members in the raging mosh pit to pick up one another as soon as someone fell down. It may seem trivial, but that’s one of the most unexpected things from the punk and hardcore scene – bands seem to actually care about their audience.

MCR pounded through more songs from their new release including a rabid version of the radio hit "I’m Not Okay (I Promise)," the catchy, "Give Em’ Hell, Kid" and the fierce "Thank You for the Venom." The band ended its set with its newest single, "Helena," as dancing goth girls and boys pranced around the stage.

As The Used set up its equipment on the main stage, L.A.-based Bleed the Dream played on the side stage for a sold-out crowd. Bleed the Dream had the prime spot playing in between My Chemical Romance and The Used and the band definitely took advantage of its good luck.

The group played a melodic version of hardcore, focused on intricate guitar lines and harmonious vocals. Bleed the Dream had tons of energy, showcasing songs such as "Villain" and "Broken Wings," and truly held its own in front of the large crowd.

Look out for their new album Built By Blood set to drop in late April. Bleed the Dream looks like they may be the next breakout band on the scene.

Utah’s The Used hit the stage with a powerful punch. The band seemed to be having a blast, with lead singer Bert McCracken admitting that this was his favorite show of the tour.

Kicking off their set with the powerful "Take It Away," the first single from their latest album In Love and Death, The Used really got the crowd screaming and pounding their fists in the air. Other rock tunes performed were "Let It Bleed," and the band’s newest single "All That I’ve Got."

The Used transitioned blissfully from tunes off their new album to its self-titled debut release, playing the well-loved single "The Taste of Ink" as the crowd sang along. Performing a set filled with heart and charisma, The Used rocked the city of Long Beach before leaving the stage with the scathing "I’m a Fake."