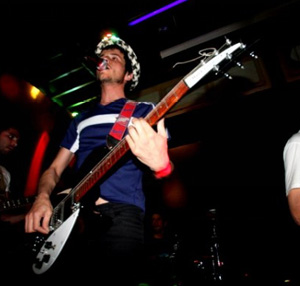 On stage a natural performer grabs a crowd regardless of the mental state in which they arrive. One of the greatest pleasures of going to shows is when you sort of like a band’s record, but then go to their show and witness something totally better and profound. This is what happened to me at Mal’s Bar.

They are called Oscar Tiene Alas and were here for the first time from Spain. They made it clear they are from the islands of Spain and not from the mainland. The volcanic, carved out caves, lagoons, craters and beaches of the Canary Islands is where nature birthed this band’s sense of style and music.

From the start, people were a bit skeptical and sort of cleared the room after Soy Disco did their thing. Once on stage, Oscar Tiene Alas’ music began to pound the room with heavy bass grooves and strong guitars that surprised everyone in the room. It was a blend of chopped up funky head nodding rhythms and an eclectic lead singer with a contagious energy about him.

Political and social songs like “Malaka” sarcastically asked us all to applaud those with the biggest cars and the most money while climaxing into a demand for that applause.

I really enjoyed a song called “Bombon.” This was a fun tune with a catchy hook that was full of electricity and bilingual festivity that had everyone dancing from the front to the back of the room.

I refuse to try and label this band with the bindings of a genre, so let’s just say this band tears through with growing explosiveness and without pretentiousness.