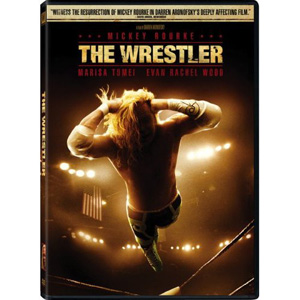 Darren Aronofsky tones down his stylistic excesses and focuses on telling a simple story in The Wrestler, one of the best films of 2008. Mickey Rourke nails the role of a lifetime as a washed-up wrestler beating himself up on the semi-pro circuit on weekends. Meanwhile, he tries to reconnect with his estranged daughter (Evan Rachel Wood) and strike up a romance with an aging stripper (Marisa Tomei).

Afterward, if you want to feel a little better about our country, check out the Inside the Third Reich Box Set, collecting four in-depth documentaries: The Goebbels Experiment, Firestorm, The Reich Underground and Television Under the Swastika.

And on a lighter note … Glass: A Portrait in Twelve Parts is a year in the life of composer Philip Glass, with Woody Allen, Errol Morris and Martin Scorsese. Scott Hicks (Shine) directs.

A Galaxy Far Far Away examines the Star Wars phenomenon in this 10th anniversary release.

Christian Slater stars in My Own Worst Enemy, the short-lived series about CIA agents who are voluntarily given split personalities, which are manually triggered at the end of the workday. Slater’s alter ego has a wife, kids, a fake job – all real to him. But one day he “wakes up” during the middle of an operation in Russia. Now this suburban dad has an international terrorist after him. While the execution isn’t exactly inspired, it’s a competent, entertaining attempt at Bourne-esque intrigue and action.

“Battlestar Galactica” fans rejoice, “Caprica” is set to fill the void left when the show finishes up its run. Eric Stoltz stars in the spin off set 50 years prior to its predecessor. The feature-length pilot is now available.

In 1987 author Clive Barker offered up a horror film different from the prevailing slasher flicks and created one of the most terrifying icons of the genre: Pinhead. Barker’s work has always had more in common with H.P. Lovecraft than Wes Craven. Hellraiser centers on an ancient box artifact, which turns out to be a doorway to Hell, calling down the Cenobites, creepy S&M demons. An unfaithful wife meets her undead ex-lover after he escapes from the demons, but Pinhead follows him.

The Hellraiser Box Set contains the Anniversary Editions of the first two films as well as a Blu-ray of the first film. Plus they come in a nifty reproduction of the puzzle box.

Charlie Sheen stars as an astronomer who picks up a signal from extra terrestrials in The Arrival (1996). When he’s fired from his job, he sets off to Mexico to get to the bottom of the message. It’s a pretty solid paranoid sci-fi thriller from the director of Pitch Black.

Before seeing State of Play in theaters, check out the original BBC miniseries from 2003. The taut political thriller is All The President’s Men for the 21st century, examining the conflux of politics, media and big business. In six hour-long episodes, there’s just too much that’s too good to cut down to a feature film. It stars James McAvoy, Kelly Macdonald and Bill Nighy. TV drama doesn’t get much better than this.