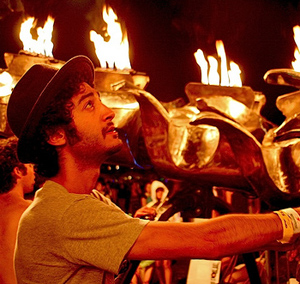 The 10th annual Coachella will probably go down in the books as one of the best. Not only were the musicians great, the actual arts were inspirational and breathtaking.

As usual there were so many acts but so little time, so I narrowed Friday to artists that I’ve always wanted to see. Felix da Housecat was so bass booty shaking, I didn’t want to leave. But Portugal’s infamous Buraka Som Sistema were about to go on next – what a great way to be introduced to the Kuduro genre.

Then I rushed to watch one of our generation’s most influential artists: Leonard Cohen. He sounded just like his albums, the band was flawless, the background singers sang like sparrows. This act might have been my favorite of the entire festival, save for the night’s closer: Paul McCartney.

There was chatter about how McCartney didn’t fit in with the theme of Coachella, but that couldn’t be further from the truth. Not only did he play over two-and-a-half hours, he shared intimate details of his life.

The day marked the 11-year passing of his beloved Linda, and as he told the audience this, he teared up and said, “Every year never gets any easier, but I wrote this song for her, and I hope you enjoy it” leading into “My Love Does It Good.” At midnight, McCartney was just finishing up “Live and Let Die” – complete with fireworks – but then he went even further with “Hey Jude” and “Can’t Buy Me Love.”

Highlights of Saturday’s music included Michael Franti and Spearhead, TV on the Radio and Thievery Corporation.

Sunday brought the most hip-hop of the festival with the Knux, Lupe Fiasco and DJ Busy P. If you were there for Lykke Li, the Swedish blond-shell did not disappoint with her infectious dancing and lilting voice.

I was so eager to see how My Bloody Valentine was going to translate to the masses. But if you lay down and watched the sky as the music played, it was almost cosmic … and that’s just what a musical experience should be.

Rounding out the fest, Public Enemy – yes, with Flavor Flav – was mind-boggling. As for the Cure, they started off loud and booming but ended as an acoustic set for 30 minutes past the Indio-mandated curfew.