The Hat: Serving Up World Famous Pastrami for over 50 Years 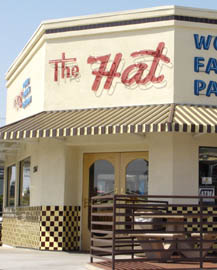 People from the West Coast and the East Coast often argue about food. California Pizza Kitchen versus Grimaldi’s or Pink’s versus Grey’s Papaya, but even a true New Yorker would agree that The Hat serves up the best pastrami this side of the Hudson River.

The Hat originated in 1951 in Alhambra on the corner of Garfield Avenue and Valley Boulevard as a walk-up restaurant with patio seating in the back. Since the beginning, the restaurant has been famed for thin-sliced, perfectly spiced pastrami.

“The pastrami sandwich comes on a French roll with onion and pickle,” says Joe Conzonire, president of The Hat. “It carries over a half pound of meat and it’s dipped in au jus.”

The Hat’s pastrami sandwich made the restaurant a success, but it didn’t fully reach its potential until sold in 1981 to its current owners, the Conzonire family. Although the food stayed the same, the Conzonires added more locations and updated the ambiance, for nostalgia’s sake.

“The food is all original recipes that have been in place since the beginning. We just refurbished the restaurants but kept the original flair and brought them back to life,” Conzonire says. “With that, original customers started coming back for the pastrami sandwiches and chili fries.”

The Hat prides itself on serving high quality food in a clean, family-friendly environment. An order of fries can feed up to four adults and a pastrami cheeseburger requires the use of two hands and a flexible jaw. All items are freshly cooked and prepared when ordered. For those that don’t enjoy pastrami, The Hat offers an array of foods for any appetite. Their menu also includes turkey, roast beef or ham sandwiches along with barbecue beef and steak sandwiches. They also make hot dogs, chili and tamales.

“I like that they are one of the only places to sell cherry soda, and their gravy fries are tasty. I’d never had a chili burger with mustard before, but that’s how they serve it here. I was hooked,” says Brian Taylor of Pasadena. “The Hat for me and my buddies is like Dog Years in [the film] American Pie. Whenever something big happens, we always go to The Hat afterward to talk about it [because] the patio is really kick-back.”

With an inviting atmosphere and mouth-watering food, it’s no wonder the company has been a success and continues to strive for excellence by upholding the standards and traditions they’ve valued for nearly 55 years.

“We’re getting ready to expand again in the city of Rancho Cucamonga, hopefully sometime in the fall,” Conzonire says. “As we take small steps, we’ve been fortunate to build in places where people are familiar with us. We have a really loyal following and through word-of-mouth, people have sought us out as a destination point.”

For locations and a full menu, visit www.thehat.com.