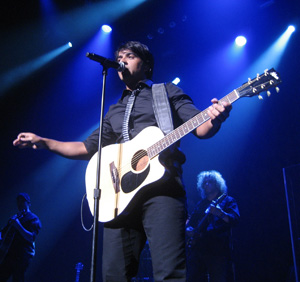 It was one of those nights that you wished you were there with a loved one. Puerto Rican pop artist Luis Fonsi serenaded every audience member at Club Nokia. Dressed in black slacks, shirt, belt, shoes and tie, Fonsi began the show with a romantic, upbeat tune titled “Persiguiendo El Paraiso” (Pursuing paradise).

The 18-song performance included songs from Fonsi’s 10-year career. Some of the prominent pieces were: “Estoy Perdido” (I’m Lost), “Nada Es Para Siempre” (Nothing is Forever), “Quien Te Dijo Eso?” (Who Told You That?) and “No Me Doy Por Vencido” (I Won’t Give Up). Fonsi, 31, is currently on the worldwide Palabras del Silencio tour, in support of his latest album (Words of Silence, 2008).

An eight-member band, which featured two back-up singers, a drummer, three guitarists, a pianist and a percussionist, accompanied him. Fonsi sporadically played an acoustic guitar and the bass while he sang.

Up next for Fonsi, who in the past has been nominated for a Latin Grammy, is South America. He will make stops in Peru and Chile before heading to Houston, Dallas, Sacramento, Las Vegas, New York and Spain.