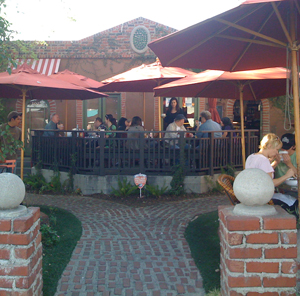 called “$40 a Day.” Its premise takes her to exotic locales with a measly $40 in hand to enjoy herself until sundown.

But I started thinking, “What if someone stretched $40 for an entire weekend?” I know I can do it, but can everyone else? I decided to create the perfect weekend with the best currency someone can have: the kind that goes really far.

A brilliant place to spend Friday night is at M.i.’s Westside Comedy Theater (1323-A Third Street Promenade) – in the alley behind Wells Fargo Bank. From May 14 to 16, the theater – which used to be the Westside Eclectic, for all you comedy heads out there – is having a can’t-miss launch festival to celebrate its brand new skin. This stage has been home to performers like Drennon Davis (“Last Comic Standing”), Amir Talai (Harold & Kumar Escape from Guantanamo Bay) and Stephanie Weir (“MADtv”). It’s now the headquarters for Mission IMPROVable, the most popular touring improv comedy show in the country. Tickets for the festivities are $10 a night. With parking, you’re looking at $13.

Saturday, spend your morning at Alcove Café & Bakery (1929 Hillhurst Ave., Los Feliz). This popular spot is open at 6 a.m. and boasts some of the most fragrant, mouth-watering java blends known to man. Aside from that, its bakery is to die for. Instead of an unfulfilling bowl of Cheerios and your roommate’s charming interpretation of coffee, you could wolf down a sinful fresh-baked cinnamon twist and a medium cup of tea in your favorite flavor for just $5 ($2.95 for the twist, $2 for the drink).

Next, drive to West Hollywood for a relaxing walk along Sunset Plaza (8623 W. Sunset Blvd., West Hollywood). Since most normal people don’t have the disposable income it takes to spend there anyway, you shouldn’t feel bad about window-shopping at nearby stores like Armani. It’s like they say: Lookin’s free (metered parking may be sparse, so check for streets where permit parking is exempt 7 a.m. through 7 p.m.). For lunch, hike to Carney’s Restaurant (8351 W. Sunset Blvd, West Hollywood) for a delicious Carney Dog (smothered in chili for $3.20), a small order of fries ($1.40) and a small drink ($1).

Cap off the evening with a game of ten-pins. All Star Lanes Bowling Center (4459 Eagle Rock Blvd., Eagle Rock) is a great place to get some exercise while kickin’ it. Bowl for $5.50, plus a $3 shoe rental.

Since everybody loves a lazy Sunday, I’m sure you’ll save yourself some dough by sleeping in. However, when you’re ready to go out and about, grab your mates and have a picnic on the beach. This will give you plenty of time to play catch-up with the crew.

Now with that remaining $8, you’re prepared to end your weekend o’ fun on the right note. Plan a fun trip to the California ScienCenter (700 State Drive, Los Angeles). Think of this as Epcot Center for broke locals. CSC gives patrons a close look at all of the technological and modern marvels that mankind has churned out over the years as well as a closer, more in-depth look at life and all its processes. Admission is free to the public. The only cost involved is the parking ($8 at the facility).

There you have it: an action-packed, maxed-out weekend that only cost you a forty. Boo-ya!