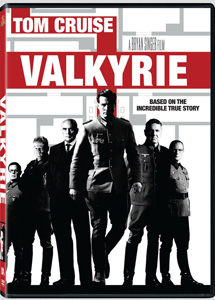 Bryan Singer (The Usual Suspects) directs the lifeless Valkyrie, starring Tom Cruise wearing an eye patch. It’s the story of a secret group within the Nazi party that hatches a plan to kill Hitler.

It’s not entirely clear if they are doing this because they really feel that Hitler is wrong or because it has become obvious that they are going to lose the war and have a lot to answer for. But since we already know that they failed and that the result was ultimately the same anyway, the whole thing doesn’t really matter.

Kenneth Branagh, Tom Wilkinson and a bunch of other Brits star for some reason, mixed in randomly with actual Germans. There are about five kinds of accents going on here, which would hardly be worth mentioning if it weren’t indicative of the thoughtlessness behind every other aspect of the film.

The Friends of Eddie Coyle is an ugly film, exemplifying ’70s grit and understated realism. Its locations are the least picturesque in Boston.

The film centers on a bar frequented by hoods, run by a snitch (Peter Boyle). In one of his great anti-hero roles, Robert Mitchum plays Eddie “Fingers” Coyle, an aging small-time gunrunner and father who is desperately trying to get out of an impending prison sentence – even if it means tarnishing his reputation by selling out his friends.

It’s not so much a crime thriller as a crime drama examining the dog eat dog life of criminals. It also features a commentary track with director Peter Yates (Bullitt).

The Town That Was is a haunting documentary about Centralia, Pa., where a coal mine fire has been burning beneath the town since 1962. Rather than spend the money to stop the spread of the toxic fires, the entire town was razed, its citizens relocated – all except for 11 of them. Filmed over four years, this is the story of those diehards who refuse to leave their town, even as it poisons them.

In time for Terminator Salvation revisit James Cameron’s epic Terminator 2: Judgment Day in hi-def. It’s amazing how well the film’s effects hold up 18 years after the fact. And Cameron’s gunmetal blue cinematography looks sharper than ever on Blu-ray.

For its scope and ambition, T2 remains the pinnacle of the franchise so far. This special edition features eight hours of extras, including commentary by Cameron.

Airing from 1949-1954, the Golden Age of live TV drama, “Suspense” was a half-hour anthology show, which over the years featured everyone from Paul Newman to Boris Karloff to Lee Marvin. Suspense: The Ultimate Collection includes all 90 re-mastered episodes, including one written by “The Twilight Zone”’s Rod Serling.

Plague Town is a fusion of the tried and true horror subgenres of creepy psycho kids and freaky inbred backwoods people. An American family getting in touch with its ancestral roots becomes stranded in a remote rural area of Ireland only to discover that it’s overrun by horribly disfigured, murderous children.

Writer/director David Gregory effectively keeps up the tension and relentless gore, but fails to frame it in a larger mythology, leaving you unsatisfied.

One of world famous chef/entrepreneur Gordon Ramsay’s many reality TV shows, “The F Word” challenges a new set of amateurs each week to work in the expletive-spouting chef’s new restaurant. The no-nonsense Ramsay remains a fascinating subject. Series Two is now available.