Doves/Wild Light: May 16 @ The Wiltern 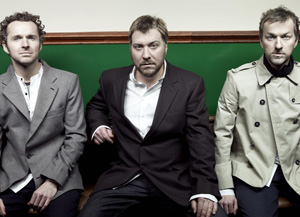 It’d been several years since Doves had come to town and four since their last record, so it should have been an honor to have them. And in a way it was; they did everything right, after all, though their satisfactory performance was somewhat lessened by all the other elements.

Nor were Doves helped any by the Wiltern’s sound, the large venue amplifying their layered Manchester pop, dark and peaceful on record, to an impersonal U2 experience. There was more power than beautiful detail, and after an hour plus of watching more than 2,000 KCRW fans bob and sway as though this generic set was the most rockin’ thing they’d ever seen, I’d simply grown tired enough to crave a night’s sleep.

Bassist Jimi Goodwin still has a smooth voice, but “Winter Hill” and the already-dated “Jetstream” off new record Kingdom of Rust were a bit blah – with all that added volume, and pounding tom drums on every corner (making even the otherwise brilliant “Almost Forgot Myself” a bit overdone). The live set would have you believe that Kingdom of Rust is the X&Y to Doves’ Parachutes. Sadly, the live set lacked a shot at the wonderfully minimal, old-fashioned English sound that you get on the new album’s title track, or “Spellbound,” for two.

There was also little space allotted for the most wonderfully sultry or minimal songs of Some Cities, arguably the best of the Doves’ four records. Instead, we got a set not unlike their Live at Eden EP from six years ago, which, like this show, did the job but found quite a bit lost in translation.