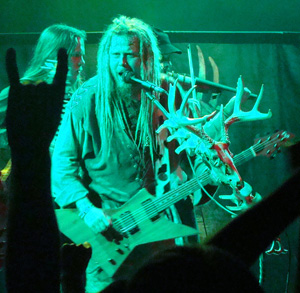 The North American counterpart to the popular European metal fest packed more metal in five bands than the periodic table could ever hope to do. In a great feat, Paganfest dispelled the stereotype of lining up a weak opening band.

Pirate metallers Swashbuckle kicked things off with their amusing thrash metal renditions of far-fetched pirate folklore replete with blow up palm trees and skeletons on stage. Their blistering, yet unfortunately-too-short, half hour set raised the bar for the following band, Canada’s Black Guard.

Their synchronized hair twirling opener immediately clicked with the audience as the group ripped through their 45-minute long set. Circle pits during their set had HOB security working hard to make their buck.

Next up was Finland’s Moon Sorrow. Along with headliners and fellow Finnish metal gods Korpiklaani, both bands made their inaugural American runs to great fanfare. Moon Sorrow’s intriguing, yet completely indecipherable set (they mainly sing in Finnish), made a human sea of devil horns after each break. Their ferocity was only matched by Ireland’s Primordial.

In what seemed to be the theme of the night; wearing black face paint as some pseudo war ritual, frontman Alan A. Nemtheanga brandished his war paint all over his bald head and ran like a maniac around the stage during their hour-long set. From jumping on monitors to inciting the crowd to create bigger and meaner circle pits, Primordial almost drained the energy out of the audience.

Fans had approximately 15 minutes to regroup, scrap some energy and ravage the bars before Korpiklaani took the stage and showed all the other bands how it’s done. Complete with a microphone that had antlers on it, the six-piece Folk metal band proved you can still have an accordion in your band and be intimidating as hell.