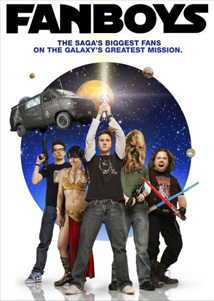 Americans may only know Russell Brand from his scene-stealing role in Forgetting Sarah Marshall and a disastrous gig as host of the VMAs, but he assures us in his new Comedy Central special, “In New York City,” he’s quite famous in Britain. At first glance he appears to be a reject from a Led Zeppelin tribute band. But his self-admitted “ridiculous” haircut belies an incisive wit and surprising erudition, which lurks behind self-aware vanity.

Fanboys is a light comedy about a group of Star Wars-obsessed friends who set out on a road trip to break into Skywalker Ranch and steal a copy of Episode I before it’s released. Chock full of Lucas references and cameos (Seth Rogen, William Shatner, Carrie Fisher), you know exactly what to expect going in. What is surprising is that the film also has a heart. Kristin Bell of “Veronica Mars” stars along with Apatow stalwart Jay Baruchel and Dan Fogler (Balls of Fury). Do we need another Star Wars parody? No. But it’s a loving send-up that works as an enjoyable little comedy.

Warner Bros. is releasing a series of long unavailable films by major directors, including: David Cronenberg’s adaptation of the play “M. Butterfly,” a departure for the horror director and yet playing with some of his usual themes; Michelangelo Antonioni’s controversial Zabriskie Point about the end of the ’60s; a retooled director’s cut of Revolution, starring Al Pacino and featuring a newly added voice over; and John Boorman’s Beyond Rangoon.

The Man Who Shot Liberty Valance, one of the finest westerns ever made, gets Paramount’s deluxe Centennial Collection treatment. The legendary John Ford directs an equally impressive cast made up of John Wayne, James Stewart, Lee Marvin and Vera Miles. Included is a commentary track by Peter Bogdanovich, along with his archival recordings with Ford and Stewart.

Experience the groundbreaking computer animation of Pixar the way it is supposed to be seen as A Bug’s Life comes to hi-def Blu-ray. Kevin Spacey, Julia Louis-Dreyfus and David Hyde Pierce lend their voice talents, and it includes tons of bonus interactive bonus features, director’s commentary and a free ticket to see Pixar's newest film, Up.

The late, great Sydney Pollack directed 3 Days of the Condor, one of the best of the paranoid ’70s thrillers. Robert Redford, Faye Dunaway and Max von Sydow star.

From Mamoru Oshii, director of Ghost in the Shell, comes The Sky Crawlers, an action-packed yet enigmatic anime feature. In a Kildren world perpetually engaged in a vague, glorified war, eternally young fighter pilots take part in daring dogfights. Yuichi, a new pilot with no memory, tries to uncover the secret of his past and why no one will talk about the pilot he is replacing. It’s a visually stunning film.

Boston Legal: Season Five – David E. Kelley wraps up the final season of his entertaining law firm dramedy, a spinoff of “The Practice.” Candice Bergen and John Larroquette round out the stellar cast lead by the two weirdest men on TV, James Spader and William Shatner.

In the vein of Bomb It and Style Wars, Inside Outside is a stylish feature documentary that takes you into the lives of graffiti artists from around the world, the risks they take and the vandalism/art form debate. It might even change your mind.