Flight of the Conchords: May 24 @ The Greek Theatre 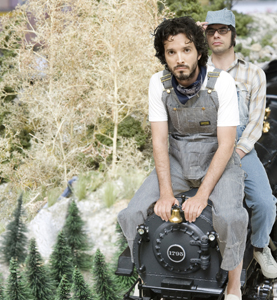 After brief stand-up sets by two frequent guest stars on their eponymous HBO series, Eugene Mirman and Arj Barker, the Flight of the Conchords (a.k.a. Bret McKenzie and Jemaine Clement) took over the stage in full robot regalia for “Too Many Dicks (On the Dance Floor).” The duo kept the capacity crowd laughing with many of the songs from their self-titled release from last year – “Hiphopopotamus vs. Rhymenoceros,” “The Most Beautiful Girl (In the Room)” and “Business Time” – accompanied by the New Zealand Orchestra: a cellist named Nigel.

They were joined by the “South American Bret and Jemaine” (two middle aged Latin men with guitars) for a bilingual version of “Think About It” that was only rivaled in hilarity by McKenzie inviting a female fan onstage only to yell, “Security!” as soon as she started climbing up to him during “Sugalumps.”