Manchester Orchestra: May 21 @ The Troubadour 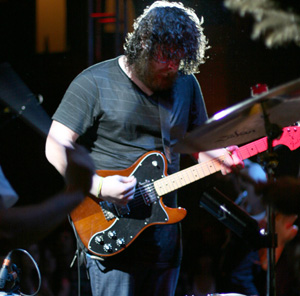 Have you ever just walked into Fun? I did, they were the band on before Manchester Orchestra, and from what I saw they were pretty damn good. I’ll have to catch them next time they come around.

The main event, though, was Manchester Orchestra, and people came in droves to see this show. The Troubadour was packed from the windows to walls, which is a capacity that I’ve rarely experienced at this venue. As the show went on I found out why.

Every other song had me proclaiming, “Wait, they did this song? I know this song. I like this song!” which is always a good sign. Sprinkled among the Manchester Orchestra tunes both familiar and unfamiliar were covers of Simon & Garfunkel and Neutral Milk Hotel, all of which were done with distinction.

Andy Hull plays as if his life depends on it, without being patronizing. The band as a whole plays with tremendous conviction. And then there is the curious case of Chris Freeman who plays (in addition to keyboards and assorted percussion) air guitar as if he is the band’s No. 1 fan in his room alone after a particularly long day.