How Trojans Can Relax and Unwind 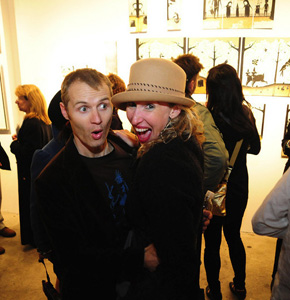 For those who dig live music, Club Nokia (800 W. Olympic Blvd., Los Angeles; clubnokia.com) is a blast. This newly done up nightspot has hosted acts such as Bloc Party and will open its doors to Bone Thugs-N-Harmony within the coming weeks (June 26). Tickets to shows can be purchased online or via the Staples Center Box Office from 9 a.m. to 5 p.m., Monday through Friday.

Looking for a party with a little more down-home flavor? Well, the girls of Gold Dust aim to please. Media mavens Sasha Lee and Jody Orsborn created an ode to the Old West that goes down at Footsie’s (2640 N. Figueroa St., Los Angeles; 323-221-6900). They spin all the greatest tunes from country’s past like Merle Haggard and Lefty Frizzell, right down to awesome classic rock from Tina Turner to Lynyrd Skynyrd. This hoedown happens from 10 p.m. until 2 a.m. Cowboy hats optional.

For all the art kids who call their parents each week bitching about how they should’ve gone to NYU or RISD instead of coming to cultureless Los Angeles (yeah, I’m talking to you!), there’s Create:Fixate (createfixate.com). This is a cool party thrown by folks who know how to get down in this town. The event is a marriage of music and creativity. Painters and sculptors show off their wares as DJs and bands play awesome jams. The crowd is also a random smattering of dirty stay-outs, hipsters, pretty people and the nouveau riche. After all, who else is going to buy all that art? The next event is June 27 at 613 Imperial St., Los Angeles, and is $15 before 10 p.m.

The roof, the roof, the roof is on fire! OK, so it’s not actually on fire. But after a night of dancing here, you’d think it was. The Standard (550 S. Flower St., Los Angeles; 213-892-8080) has long been – well, the standard of excellence when it comes to nightlife. Beautiful guys and gals as far as the eye can see can be found kicking it near the heated pool. But that’s just the beginning of its stellar ambiance. You’ll get an outdoor fireplace, access to its world-famous bar and panoramic views of beautiful, scenic Downtown (vagrants tinkling on bus stops included).

But I’m going to have to say that one of the finest new party places in all of Los Angeles is one slightly off the beaten path. You’ll need a friend to get you in, but once you manage that, prepare for massive shenanigans. The Pegasus Apartments (612 S. Flower St., Los Angeles; pegasusapartments.com) have become the newest hotbed of awesome late-night activity. This gorgeous building is home to a number of FIDM and USC students who KNOW how to throw a live joint better than any event planner out there. Some of these ragers start one day and don’t stop until two days later. However, try to show some respect for the other people living in the building by keeping your crazy confined

Fun for Less
Fun on a Budget: The Hollywood Way!
2,802 views

Fun for Less
Dollars and Scents: Fab Fragrances Under $20
3,807 views

Fun for Less
Getting Hitched For Mere Cents
2,103 views
bid=||