Friday the 13th: The Final Chapter, Elsewhere and More 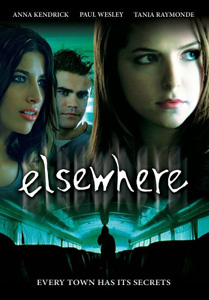 The British Are Coming!

Before he was Gregory House, M.D., Hugh Laurie was a bona fide British comedy star. Along with partner Stephen Fry, they were something of a British Martin and Lewis. Check out the hilarious duo in their turns as legendary humorist P.G. Wodehouse’s most famous creations in Jeeves & Wooster: The Complete Series.

The misnamed Friday the 13th: The Final Chapter (the fourth film) kicks off the supernatural era of the franchise, now available in new deluxe editions. The highlight of the later films, The Final Chapter stars the always-weirdly engaging Crispin Glover and a young Corey Feldman as Tommy Jarvis, the boy genius who takes over as protagonist for the series. A New Beginning and Jason Lives are also available.

Anna Kendrick of Twilight and Tania Raymonde of “Lost” star in Elsewhere, a teen thriller about a small town girl who goes missing after she meets a guy online and the friend who tries to find her.

One of New Wave auteur Jean-Luc Godard’s lesser-known films, Une femme mariée from 1964 is a typically iconoclastic dissection of the modern world’s commoditization through the portrait of a love triangle. It received a Golden Lion nomination at the Venice Film Festival.

“Mystery Science Theater 3000”’s Mike Nelson returns with his puppet cohorts Kevin Murphy and Bill Corbett in their newest venture, RiffTrax, now on DVD. Previously, RiffTrax differed from “MST3K” in that the commentary was available only as mp3 downloads that you would synch up to a DVD at home. The brilliance of this is that they can get around copyrights and lambaste a whole wealth of well deserving recent movies (I recommend Road House and Troll 2.). Now RiffTrax has expanded to include classic films such as Reefer Madness and the original Little Shop of Horrors, plus their always-brilliant collections of educational shorts.

The Law of Ueki: The Complete Series features 13 discs of crazy anime power battles. The show’s premise is simple enough. Mentors grant one junior high student powers and enter them in a tournament. The apprentice who wins garners the master title of King of the Celestial World. Really it’s just an excuse to show off one of the staples anime.

Nobel Son is a darkly comic thriller whose cast alone should have guaranteed a better release than it got. Alan Rickman stars as an egomaniac Nobel Prize winner, philandering husband and critical father whose son’s kidnapping sets off a series of Elmore Leonard-influenced plot machinations in which the dysfunctional family members attempt to get even with one another. Mary Steenburgen, Bill Pullman, Eliza Dushku and Danny DeVito round out the cast. The script is clever enough to compensate for the overly stylized direction of Randall Miller (Bottle Shock).

Harrison Ford stars in Crossing Over, a Crash-esque “we’re all connected” look at illegal immigration that was all but buried by the Weinstein Company. Writer/director Wayne Kramer (The Cooler) is the latest in a long line of people to clash with Weinstein. Sean Penn also demanded that his part be cut from the film. Still, it’s ambitious and better than the release it got. Ray Liotta and Ashley Judd co-star.

Scott Walker: 30 Century Man chronicles the evolution of singer Scott Walker from ’60s teen idol as a member of the Walker Brothers to reclusive fringe artist exploring the boundaries of music. Produced by David Bowie, an ardent devotee, the documentary features commentary from other artists such as Radiohead and Brian Eno, who owe much to Walker’s sonic explorations. The media-shy Walker himself contributes, as well as welcoming cameras inside the studio (a first). It’s an in-depth look at an underappreciated artist and sure to nab legions of new fans.

Tomb Detectives is a fascinating six-part documentary series, which follows a team of archeologists traveling the world to ancient gravesites. Using new technology, they solve macabre mysteries surrounding these deaths, from sacrificial rites to vampire superstitions.