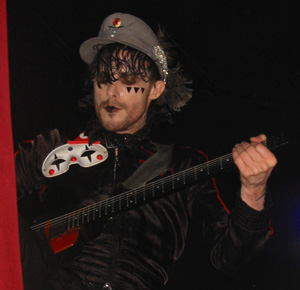 Surveying the fans assembled outside the El Rey prior to the IAMX show brings to mind Bowie fans queued in orange mullets and glittery unitards in the 1970s. Outside there is a healthy dose of feathers, vintage hats, sparkly makeup and showy clobber, like an audition for “Cabaret” gone gothic. There’s even a Ziggy Stardust clone thrown in for good measure. The rock show as the interactive spectacle has been missing from the music scene for some time. IAMX has clearly brought the excitement of playing dress up and going to a raucous show back to fans.

The night begins with a bang with Iranian indie rock ensemble Hypernova, who garner an enthusiastic response. A teaser of the mayhem to come, the guitarist demolishes his guitar on their final song, much to the audience’s delight.

IAMX explode onto the stage in full decadence with “Bring Me Back a Dog,” frontman Chris Corner darting about the stage like a freshly launched pinball. Corner and keyboardist Janine Gezang have a particular sexual chemistry, inciting howls from the crowd as they paw at each other throughout the evening.

Familiar songs like “The Alternative” and “Sailor” open the door for new material like the rhythmic “I for an I” and the sentimental ballads “Tear Garden” and “I Am Terrified,” all received with equal fervor. “My Secret Friend” isn’t quite as lovely sans fellow British synth-genius Imogen Heap, but carries well enough to the live arena.

“Kiss and Swallow” rounds out a set that seems much too short. Thankfully Corner traipses back onto the stage waving a wine glass about, kicking off the first of two encores with the new release’s anthemic gem, “Think of England.” Next, “Skin Vision” collides into the ever-popular “President,” which spurs its usual group sing-along before the band threatens to leave the stage again.

After only a brief pause (and by brief, I mean we barely have a chance to clap our hands together), the band finishes off the night with “Your Joy is My Low” and ends at a fever pitch with “After Every Party I Die.” Although the former gets off to a shaky start, the latter brings the perfect evening to its inevitable climax with Corner drifting about atop the crowd in true rock star fashion, fighting to reclaim his mic as he struggles to return to the stage in time to belt out the last refrain. It just doesn’t get better than this.