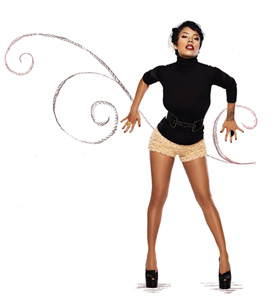 As I walked into the sold out Nokia Theatre I had no idea what was about to take place. The night was set for three of the biggest stars in R&B to takeover Los Angeles, and takeover they did.

Kicking things off was the beautiful Keri Hilson performing her hit singles “Turnin Me On” and “Knock You Down.”

Until tonight I was skeptical of how well Dream would do as a performer, but it looks like hanging around Kanye has elevated his live show because this wasn’t just a performance; it was like a huge music video. Equipped with a ridiculous light up background, the Dream tore the stage up, serenading the women in the audience with his hits “Walkin’ on the Moon,” “Falsetto” and the club banger “Rockin’ That Thang” to close it out.

When the lights came on, the crowd waited in anticipation for the headliner of the evening, Keyshia Cole. Chants of “Keyshia, Keyshia” began to fill the arena as the lights faded to black.

When she took the stage it was nonstop action. The crowd sung along word for word as she performed hits from her three albums.

The night was moving along smoothly, no one was ready for what happened next. One after another Cole upped the ante, giving the crowd their money’s worth by bringing out guest after guest to rock alongside her. These weren’t your ordinary guest appearances. We’re talking Lil’ Kim, Too Short, Monica, Daniel “Boogie” Gibson, Nas and P. Diddy even came out to perform their hit song “Last Night.”

By the end of the show the crowd was exhausted and satisfied.