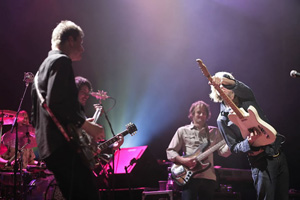 Wilco hit the stage at The Wiltern.

All you really need to know about a Wilco show is to wear comfortable shoes. After one and a half hours, 25 songs (a full set and two encores), you’re almost as exhausted as the band members.

Drummer Glenn Kotche and bassist John Stirratt get your feet moving with every rhythmic beat of their instruments. Nels Cline is a monster on guitar; his solos leave you breathless. Frontman Jeff Tweedy’s scratchy yet emotional vocals are touching during old favorites like “Via Chicago,” “Heavy Metal Drummer,” “I Am Trying to Break Your Heart” and newer songs “Deeper Down” and “You Never Know” from their latest, Wilco (The Album).

Although Tweedy barely speaks in between songs, because the band rarely stops to take a break, when he does share his insights, it’s hilarious – from trying to convince the audience to buy programs and wrist sweatbands to initiating a new tradition of yelling thank you instead of clapping after every song.