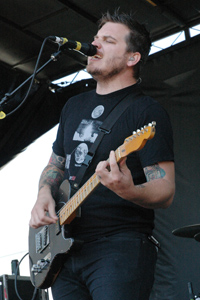 Another year, another Warped and another round of awesome win balanced by equal parts of “WTF,” so goes the age old cycle. This year’s Ventura date of Warped rolled out big hitters early on, with O.C. natives Thrice playing early but still bringing the epic as they always do, with a set of greatest hits and two promising new tracks from their forthcoming album. P.O.S. also brought more rock than half the bands on bigger stages despite only having a microphone and turntables in his setup. Conversely, Bayside and After Midnight Project got their full band rock on for even more legit side stage ear-melting, and it wasn’t even 1 p.m. yet.

Warped vets Saosin and Meg & Dia brought their signature energy in full force later in the day, while newcomers There for Tomorrow and VersaEmerge proved themselves worthy additions to the Warped family. Slightly more on the concussive side, Gallows showed no fear of getting rough and dirty with their fans, while Alexisonfire served as the most fitting epic bookend to Thrice, closing the cold and windy night with the biggest sounding rock of the day.

On that note, it’s a bit perplexing how bands like Bayside, Saosin, Senses Fail and Alexisonfire received side-stage placement while a band like the Devil Wears Prada snagged a main stage spot, but maybe that’s for the best. It makes things much easier when there’s a clear distinction between the side of the venue with good bands playing, and the side where Brokencyde, Jeffree Star and Millionaires are playing.