The Zombies: June 27 @ The Wiltern 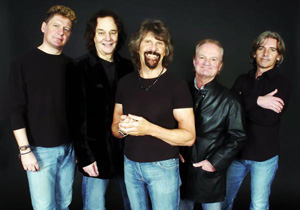 Were it not for Colin Blunstone, the Zombies would possibly be lacking for charm these days – it is his voice, like Ray Davies’ at its highest, still reasonably breathy and fully as sweet at its most subtle, that keeps the Zombies from sounding stale, what with the addition of stronger guitar and Rod Argent’s constant need to point out the legend in their 40-year-old songs (as declared by the likes of Mojo, says he).

Yes, the large size of the Wiltern meant the volume of Steve Rodford’s drums was too prominent for the sweeter songs. Argent’s Hammond was a bit indulgent at times, as were the guitar embellishments added to, for instance, set conclusion “She’s Not There,” which would have benefited from a touch less electricity. And perhaps the bluesy “Mystified” was their county fair moment.

But then, a few songs into the set, which had begun with “I Love You,” the band took care to play a cluster of songs from Odessey & Oracle (“A Rose for Emily,” “Care of Cell 44,” “This Will Be Our Year” and “Time of the Season”), and Blunstone’s uncomfortable steps and timid snaps briefly came to a halt when he showed perhaps some accidental passion, bending his knees in and throwing his arms out excitedly, as though he truly felt the anticipation in “Care of Cell 44.” It was clear then that Blunstone is what makes the band so unbelievably lovely, even 45 years from its inception.