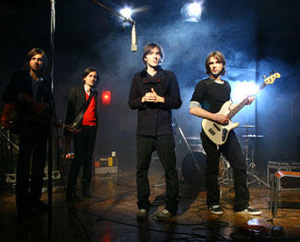 Phoenix hit the stage June 28 at The Wiltern.

Independent music-lovers from all over Los Angeles had been waiting months for this show. Fans packed into the historic Wiltern anxious to hear the sweet sounds of Phoenix.

The French quartet rocked the show with an intensity that matched the crowd’s energy. People weren’t merely listening; they were singing, dancing and showing their appreciation for the auditory artistry.

The band started with “Lisztomania,” the popular song from their new album, Wolfgang Amadeus Phoenix. Throughout the show, favorites like “Too Young” and “Funky Squaredance” were mixed in with new tracks like “Rome.”

The sound of Phoenix performing live is HUGE, taking the slick album versions of their tracks to a different level. The synth player doubled as a percussionist, allowing the drummer freedom to wail, injecting crazy energy into each song. The luscious amalgam of the hypnotic beats, nostalgic synth sounds and vocal stylings of lead singer Thomas Mars transformed the Wiltern into a crazy, infectious dance party.

Phoenix ended their set with “1901.” The crowd went wild, enjoying every last drop. “Rock With You” by Michael Jackson came on as the show ended, and everyone stayed and danced as a tribute – a great ending to a great show.