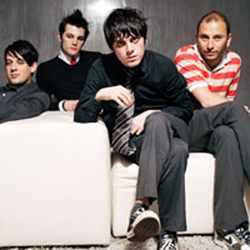 It was already two hours into the evening, a few hipsters stood in front of the stage pretending not to care about the upcoming New York bands, but I had no intention of giving up my coveted seat near the back of the room until the headliners came on … and that’s when Plushgun took the stage. I had never heard of them before, but their very first song had me moving in my seat. Before the end of their second song, the Brooklyn trio had me on my feet.

This electro-pop band has a happy, dance-y sound that you really can’t help loving. Plushgun’s already infectious music is only amplified by their presence onstage, and their album, Pins & Panzers, (while beautifully constructed) doesn’t do justice to the energy these boys deliver onstage.

Around 11 p.m., headliners Nightmare of You took the stage to thunderous applause. The band hasn’t released a full album since 2005, so many of the songs were old favorites from their self-titled debut, but NOY also played four new tracks to the delight of fans.

The band joined forces with openers Brian Bonz and the conga player from West Coast-based Magic and jammed between (and sometimes in the middle of) their own songs, which would have been tedious except for the way Brandon Reilly and Joseph McCaffrey absolutely shredded on their guitars, leaving the crowd stunned and breathless.