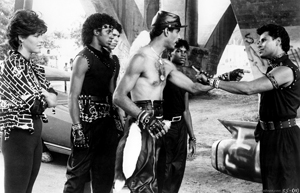 The other day while on my stair climber, I started watching Sweet November, starring Charlize Theron and Keanu Reeves. It’s the story of a chick that never dates a dude for longer than a month. This was RIGHT up my alley. Even though Theron’s character was dying of cancer, she was me to a T – flighty, fun and fabulous.

This got me thinking: Wouldn’t it be cool to have a deeply passionate romance with someone that ended before all the expectation and crappiness sets in? I mean, slow your roll, Brosephus! Do you REALLY need to meet my friends and parents? I don’t think so.

With that, I offer you life … Hollywood-style.

I propose that in these trying economic times, we live our lives like our favorite movie. No, I’m not expecting you to become a Jheri curl-wearing contract killer like Samuel L. Jackson in Pulp Fiction (Like, seriously – don’t do that.). But there are little ways to inject a bit of fun and quirk into your life just by turning on your TV.

Are you deeply romantic with no prospects in sight? Start where I have: Sweet November. What could be more invigorating than a month-long tryst with the guy or girl of your dreams? Go up to that hottie you’ve been hawking or talk to on the Internet and state your intent. Be as honest as you need to be; this is a fantasy to be realized.

Love is a numbers game, so if a response doesn’t happen immediately, trust me, it will. When you finally land the dreamed-about interlude, make it a memorable one filled with shared bubble baths, whisper-filled massages and tons of love letters. Then after your 30 days is over, peace-out knowing that you had a blast (Or if you’ve made a significant connection, stick around).

A co-worker of mine told me that he recently watched Breakin’ 2: Electric Boogaloo. We chatted about our mutual love of Turbo and Ozone. That night, while out with my buddy, Zachariah, he and I had a mini breakdance-off to the delight of some (easily amused) passersby. Neither of us broke character the whole time, and we really had people thinking we were street kids with a passion for dance and a dream of getting out of the ghetto – even though both of us are dorky black kids from the ’burbs.

Whatever your favorite dance movie is, I’m sure it follows this formula: kid with a dream + some adversity + dance contest = dream realized, bad dialogue and serious body-rockin’. Get your craziest bestie and create a day out on the town in character as your favorite dance flick cautionary tale.

You’ll have a blast duping people into thinking you’re really serious about all that stuff. Unless, of course, you’re really a dancer with a dream, in which case, carry on my friend. Carry on…

With summer in full swing, it’s the perfect time to spread your wings and assert your independence. What better role models to follow than Diego Luna and Gael Garcia Bernal in Y tu Mamá también? The movie is about the charming but often insane moments that happen during a road trip taken by two best friends.

I’m not saying you’ve got to engage in drunken make-out sessions or rock out naked with one another (It’s in the movie, people.), but you should put forth the effort to travel and see the world – even if it’s a drive to San Diego or Palm Springs for the day (split gas costs and pack a lunch if cash is tight). You’ll learn a lot about yourself and others on the open road.

Fun for Less
Fun on a Budget: The Hollywood Way!
2,842 views

Fun for Less
Dollars and Scents: Fab Fragrances Under $20
3,854 views

Fun for Less
Getting Hitched For Mere Cents
2,144 views