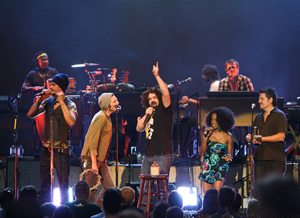 Normally an opening act takes the stage, followed by main support, then the headliner. Not on this tour!

The Counting Crows are changing the way concerts are being done with the Traveling Circus and Medicine Show tour. After noticing that a majority of the fans were showing up for their set only, the band felt it was their duty to change it up and make sure that the other acts got just as much attention as the headliner.

When the curtain rose at the Greek, there was a full stage. All three bands jammed out to two songs as a whole. The energy was indescribable.

Fans jumped up from their seats with hands in the air. Dancing around with smiles firmly in place, the crowd greeted the new format openly. By integrating the artists right off the bat fans could get a chance to enjoy something they might not have seen or heard before and enjoy it in the context of a band that they love.

As far as the headliners, Counting Crows put on a show reminding everyone why they are still a band that is worth seeing live. Selling out venues isn’t enough, these guys are still writing great songs and putting their heart into every note.

Jamming through song after hit song, the mix of piano, guitar and accordion pushed the limits of any CD you might have on your shelf. But it was truly the free-form openness of the stage that brought the show to life. Whether it was Michael Franti singing with Adam Duritz or Spearhead laying down the sound for Augustana, the mix was what made the show a night to remember.