Getting Candid at Candor 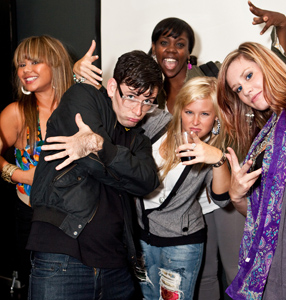 Los Angeles is probably one of the better playgrounds in which I’ve partied. I did my time in New York City, and that was a’ight. I even left some collateral damage across the south, in San Francisco and overseas.

But the same-old, same-old can occasionally lose its luster. After a bender of nights at Spaceland, after-hours kissing seshes at Little Joy and contact highs from my dirtbag stoner friends (my car still stinks, thank you very much), it felt appropriate to find a new way to pass the time.

Seek and ye shall find: I was recently invited to Candor Studios for a night of comedy. I’ve been a fan of stand-up and improv for a number of years, so I jumped at the chance to check it out. With my friend, Josh, in tow, we headed over to Fairfax Avenue for what would prove to be a memorable evening.

Candor Studios is shoving its way – with elbows (and balls) of steel – into the already crowded comedy scene. This collective has become an exciting place to catch irreverent stand-up as well as other diverse cultural projects not being tackled anywhere else. What’s even more thrilling is that many of the performances and properties in the works can be viewed online.

Attending live tapings like the one we saw is a pretty easy deal. It’s by invitation only – RSVP at events@candortv.com. Once details arrive, you’ll need to get there early, as seating is limited. However, the open bar is a great way to anesthetize yourself while kickin’ it Indian-style on the floor if you can’t get a chair.

The first comedian we saw was Dylan Mandlsohn from Canada. This guy was a perfect combination of Conan O’Brien and Jim Carrey. He did things with his face that should be outlawed in several states. There was a moment in his act that was so uncomfortable to watch, people could be heard gasping and laughing from the audience.

Next was Steven Glickman. I’d heard of his work (from shows like the “Late Late Show with Craig Ferguson” and NBC’s “Last Comic Standing”), but I had to see it to truly appreciate it. Glickman’s comedy was loud and brash – a bit like Sam Kinison but way less annoying. He told jokes about being Jewish that I can’t repeat in polite company, but trust me, you would have cracked up as much as I did.

Hottie Moshe Kasher was the third to take the stage. Kasher brought a little bit of hipster humor to the event. Rocking a nice Fred Perry and some skinny jeans, he regaled the audience with tales of wanting to date black women (my number is 310-770…) and even performed some physical gags that were weirdly gross and funny to boot.

But the real breakout of the evening for me was Bret Ernst. My friend and I busted each other’s chops for the rest of the night with quotes from this comedian’s hilarious set. I mean, it’s not everyday that a self-professed Guido allows you to poke fun at his bizarre cultural rants without getting punched in the face by him and his boys.

Overall, it was the diversity of the crowd that I really liked. My main beef with most of my hangouts is the homogenous multitude that they attract. My circle of friends looks like a United Colors of Benetton ad, so I like to see this reflected in the establishments I frequent. Candor is cool because you can be a hippie, a yuppie or – in my case – a blipster and not stick out like a sore thumb.

Candor Studios is located at 729 N. Fairfax Ave., Los Angeles. For more information, visit candortv.com. The next Stand Up at Candor will be Sept. 1, and you can view past Candor events on hulu.com.

Fun for Less
Fun on a Budget: The Hollywood Way!
2,820 views

Fun for Less
Dollars and Scents: Fab Fragrances Under $20
3,829 views

Fun for Less
Getting Hitched For Mere Cents
2,124 views
bid=||