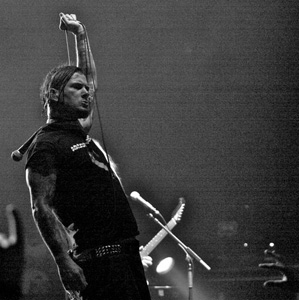 With the death of legendary guitarist Dimebag Darrell still resting heavy on his shoulders, Down frontman Phil Anselmo gave one hell of a heartfelt performance. For years, Anselmo was the victim of a bad back that led him down the path of hard drugs to subdue the pain, and with it, his grace as a singer. But finally getting help for his issue, he cleaned up.

With this newfound sobriety, Anselmo took control of the stage and sounded as good as he did back in the Cowboys from Hell days with Pantera. Belting out every lyric, he whipped the crowd into a frenzy within a matter of seconds of starting the show. Still the toughest frontman on the planet, this reborn man gave the fans exactly what they had been missing all these years.

Backing Anselmo’s charged performance were two staples of the metal world on guitar, Corrosion of Conformity’s Pepper Keenan and Crowbar’s Kirk Windstein. Each musician brought a different element to the sound that has made Down the toughest Southern metal band to take over the scene since the collapse of Pantera.

Keenan is known for his tough guitar playing that seems to harmonize with anything thrown his way. Throughout the set he looked like he was on another level, finding ways to squeeze every ounce of sound from his stacks of Orange amps. Matching the intensity of Keenan is Windstein and his crushing tone. With both men at full force led by Anselmo, it’s hard not to get hooked on their blues-inspired grooves.

Instead of drug crazed random acts of violence at this show, the new version of Anselmo was inspiring and fed off the energy of the audience with an honesty not found in many artists. He had a smile painted on his face in between songs instead of an empty grin.

Down is in fact an honest and sometimes brutal attack on the soul. Not many bands can follow the ways of the South and pour their souls into songs and wrap them in the world of hard rock, but when you have legends like this on stage, it’s hard to go wrong.