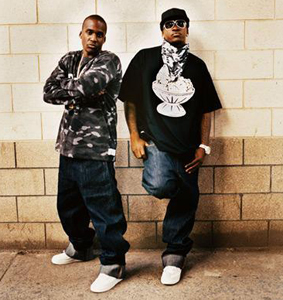 The Cool Kids are known to use old school sounds from the ’80s and ’90s to create an edgy new sound with complex arrangements. No breath was wasted as Chuck Inglish and Mikey Rocks traded bars as if they were on the floor at the stock exchange and captivated the crowd with their Windy City charm.

Closing the show were the Clipse. On the road supporting their upcoming release, Till the Casket Drops, they’re grinding to get out of the shadow of friend and super producer Pharrell.

Making their claim at being one of the best hip-hop duos of all time, Clipse took the stage with a thundering bass line and hard drum kicks and exploded into 32 bars of swag mixed with the pain and distain of the drug trade with a touch of the glamorous life. When the classic song “Grindin’” came on, the House of Blues erupted. Boasting at least four chart-topping singles, the audience, myself included, recited each line word for word as Malice and Pusha T showed why they are considered trendsetters.