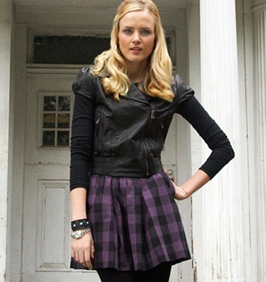 Get great back-to-school looks at Loehmann’s.

One of my all-time favorite songs on this planet is “Summer” by Buffalo Tom. It’s a great tune all about the passage of time and leaving stuff behind. Technically, there’s no such thing as the end of summer here in Southern California. It’s hot – occasionally, it gets cold for about a month. In June, the sky is overcast, but then we’re right back to the heat again.

But let’s pretend for just a second that we were privy to the majesty of changing seasons. How would you say goodbye to the summer while ushering in the fall?

Want to pick up some great back-to-school fashion? Look no further than Loehmann’s (loehmanns.com). The discount department store has been slashing prices like a Chrysler dealership since the recession hit. For label-lovers who never curbed the urge to charge it, you’ll get a real break at the store by becoming a gold member. Loehmann’s in-house membership card gets customers a 10 percent discount on ALL merchandise (including sale items) – all you do is pay an annual fee of $25. If you’ve never been to a sale at Loehmann’s, honey, you haven’t lived. I’ve bought items from Christian Lacroix, Michael Kors and Alexander McQueen for as low as $19.95.

Another aspect of the summer that we all have to wave bye-bye to is the big blockbuster popcorn movie. But never fear, because the end of the year also brings with it some fantastic art flicks. Still, not everyone can afford to spend $13-$14 for a movie ticket, as well as the $2 parking fee. And not everybody wants to wait ’til Netflix releases the comedy, drama or doc on their wish list.

That’s why any good cinephile should join the KPFK Film Club (kpfk.org). For $150 a year (kind of steep, but hear me out) you and a guest get to check out any 12 films on the roster. Past screenings have included the tres cool animated feature Chicago 10 as well as Control, the story of suicidal Joy Division frontman Ian Curtis. Now, here’s the best part: Because your $150 is actually a pledge to the station, you can deduct the amount on your taxes and write it off as a charitable donation. That means you and yours can watch a year of great movies, for free.

New to the city but don’t know how to meet people? Well, the autumn months mark the beginning of great educational offerings in the area. LACC (855 N. Vermont Ave., Los Angeles; lacitycollege.edu) has a ton of fun-filled courses that you can take after work or in your spare time. Learn how to roll sushi or become a famed cake decorator like Duff on “Ace of Cakes.” Need extra training in computer science? Try a course in Photoshop or Flash. Don’t worry if you aren’t in close proximity to LACC; Santa Monica College (1900 Pico Blvd., Santa Monica; smc.edu) and Glendale Community College (1500 N. Verdugo Rd.; glendale.edu) also have great classes (for credit or just plain recreation) at low prices.

Finally, if cupid’s arrow never managed to strike you in the keester over the summer, don’t despair. Fall is a good time to put yourself out there romantically as a speed dater. I’ve tried this sport several times and trust me, it gets easier the more you do it. I love speedladating.com. For a small fee (around $35 for most events), you get treated to a night o’ fun at a swanky, predetermined location somewhere around town. The British hosts will win you over with their charm and humor. Not only that, but you’ll get the chance to link up with some great men and women that you probably won’t meet on craigslist.