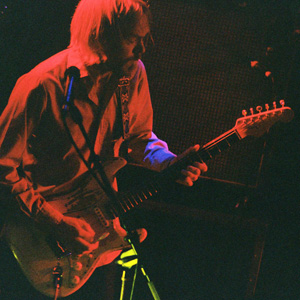 There was a point during “Ta Det Lugnt” at which Gustav Ejstes, after shouting the three words-as-chorus with a bit more height than usual, redirected his microphone toward the audience so it could echo his “lugnt.” What, because we’re any good with phonetic Swedish? With a squint here or there, now and then, one could even make out the appearance of lips opening and closing along, faking it through a mouthing of foreign lyrics.

While Ejstes danced and shook a literal fever out of his system, taking an occasional break to psych out on piano or flute (his eighth flute, says he), bassist Mattias Gustavsson rocked a fro and a modest blue drum kit transformed into a booming hero by way of mallet. The group, modest and quiet, represented by Ejstes’ constant shrug of shyness, brought peace and cool with its psychedelic folk-rock, a real feat in this tiny and stuffed black room.