The Colour: Tour Out & About 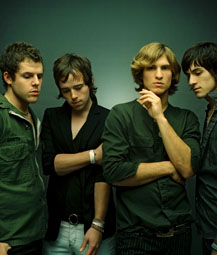 The members of Whittier’s The Colour are self-proclaimed “free food users.”

“We’ll go from having absolutely no food to playing a show where they’ll bring us a meal and say [it’s on the house]. We have absolutely no tact when it comes to that stuff,” lead singer Wyatt Hull says. “They gave us our own room at The Standard and said we could order whatever we wanted. The refrigerator was empty by 4 o’clock.”

But if you’ve ever seen their live show, it’s clear that the protein and carbs are put to good use, especially in the case of Hull who is notorious for breaking microphone stands during the band’s spastic, energetic sets.

“I totally beat the shit out of one at The Galaxy [in Santa Ana]. In Sacramento, I don’t know how … but it snapped like a twig,” Hull confesses. “The owner came up to me and said it would cost 20 bucks.” “Wyatt just told him to put it on his beer tab,” guitarist Luke MacMaster interjects.

The members of the band – vocalist Hull, guitarist MacMaster, guitarist David Quon and drummer Nathan Warkentin – met at Biola University where they were all studying art. Bassist Derek Heule recently joined the band.

“We all dropped out of school, but our drummer graduated and we don’t know how we let that happen,” Hull says. “[Then] we sold everything we own to buy instruments.”

The band has been playing together for two and a half years but didn’t make it official until a year and a half ago by deciding on a moniker. “[The Colour] is a vibrant name that isn’t too over the top,” Hull says. “It’s very simple and to-the-point.”

“Simple and to-the-point” are themes carried over into the band’s music, which mixes the relaxation of The Beach Boys with the piercing guitar of The Strokes and the liveliness of The Beatles. What results is a classic rock vibe with a grove all its own.

Hull writes the lyrics, but each group member equally adds to the writing process.

“I’d say that more of the upbeat songs lyrically are pretty obvious. It’s a lot about relationships and the obvious subject matter,” Hull says. “As far as the darker songs, there’s a lot to do with death and starting over.”

The Colour recently signed with Lizard King, a United Kingdom record label that also works with The Killers. The band is looking forward to the May 30 release of their “Mirror Ball” single in the UK and hope to put out one more single before they ready their first full-length effort.

“We’re so ready for more material but the truth of it is, we don’t know when it will be,” MacMaster says. “We know what we want to do as far as style and music goes and we’re not trying to be like other bands in the area. I think that’s what’s drawing in the fans.”

After touring throughout California, Washington and Texas in support of acts such as Louis XIV, Switchfoot and rapper Slick Rick, The Colour are set to venture overseas to build upon their existing fan base. Starting May 27, the band will be the opening act for New York band-of-the-moment The Bravery in the UK. When they return in early June, they will bring Kasabian back with them for a string of dates in the States.

With a new EP, Out & About, released May 16 in the U.S., and tours scheduled for the next two months, there’s much to be said about this still stateside, unsigned band, but the guys are confident that, in the end, their efforts will pay off.

Out & About EP is currently available. The Colour will play Chain Reaction in Anaheim on May 20. For more information, visit www.thecolour.tv.