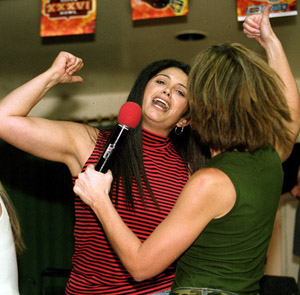 About a week ago, I was in the car with my friend, on my way to Fred 62 when “Head Over Heels” by Tears for Fears came on. I put the ’80s jam on blast and started belting out the lyrics at the top of my lungs with my “Mariah-hand” waving in the air.

My companion looked at me like I’d just exposed myself or something. I guess in a way, I had.

I’ve been in love with karaoke for years! Sure, I’m not the world’s greatest singer, but I get stoked doing my thing in front of a crowd.

Los Angeles has got a lot of wannabe EVERYTHING here, so it’s a real drag to frequent a place where the singing isn’t done in the spirit of fun and stupidity the way it should be. Sure, it’s impressive if you can hit those Christina Aguilera notes, but honestly, I could care less. I’m just there for the Buffalo wings and to make fun of people.

If you’ve ever dreamed about taking the stage with a group of musicians backing you (but don’t want to commit to starting a band), try live band karaoke. I first heard about this phenomenon while covering Punk Rock Karaoke’s show at the Roxy. The venue hosts Rockstar Karaoke Oct. 11, featuring appearances by Mark McGrath, Dee Snider of Twisted Sister and Jason Bonham, among others. Former teen heartthrobs Corey Haim and Corey Feldman have a Web site devoted to their live band karaoke (coreyoke.com).

For those who are less interested in singing and actually enjoy the spectator sport of watching drunken Asian 40-somethings get jiggy wit’ it (sounds lame, but TRUST – it’s pretty effin’ cute), the Pattaya Bay Thai Restaurant (1727 N. Vermont Ave., Los Feliz; pattayathaila.com) is good times. The food is tasty and cheap, and you can’t beat the convenient location. But it’s not until the booze gets flowing and the night drags on that the festivities begin. If you stay long enough, you’ll be able to see some brave souls sing the finest in adult contemporary music in their native tongue (which is rarely English).

Culver City has become one of my all-time favorite neighborhoods since moving to Los Angeles. It’s so eclectic and cool and not as suburban and yuppie-filled as Santa Monica. One karaoke bar that’s picking up a lot of speed in the C.C. is Backstage Bar & Grill (10400 Culver Blvd., Culver City; backstageculvercity.com). The good folks at Backstage have gotten all kinds of accolades for their contribution to the songtastic world of bad vocal stylings.

The Internet is abuzz with the low cost of booze here as well. Get $3 well drinks during Happy Hour (Mon-Sat, 4 p.m.-7 p.m.), then stay for the music, which starts Thursday, Friday and Saturday nights at 9 p.m. Don’t think you’ll have a blast? Well, don’t just take my word for it – “Entourage” star Kevin Connelly and funny guy Jonah Hill have been photographed hanging here.

But for the greatest in karaoke moments, you really need to head back to the land of all that’s cheesy: the Valley! Yes, nobody does suburban pastimes better than the geographical world that spawned cultural phenomena like mallrats and crispy bangs.

One of the most fun places to get your sing on would have to be Dave’s On Broadway (708 E. Broadway, Glendale; 818-956-9123). It’s a seedy, dive-y little watering hole with a decent music night. But what gets folks revved about the place the most is the fact that it’s not a pretentious hipster bar. Personally, I don’t mind the Chuck Taylors crowd one bit. But if you’re looking for an escape from them, then this might be your joint.