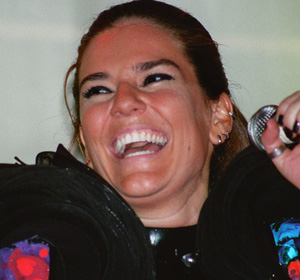 This Os Mutantes performance, in which singer/guitarist Sérgio Dias Baptista came to light as the face of the group as it had been founded in late ’60s São Paulo, was all things animated, celebratory, joyous. Since their return a couple of years ago, the band has found a place with ANTI- and now has a fresh record to share, Haih Or Amortecedor, which was well-sampled at the Echoplex by a group which largely appears to consist of members half the age of its founders. No bother, though, they were all smiles to the nth degree.

“Querida Querida,” off the brand new Haih Or Amortecedor, found new female vocalist Bia Mendes, dressed to nudge forward the new adventures of Barbarella, exercising her face with the expression of a skilled telenovela actress. Meanwhile, the equally new “2000 e Agarrum” was positively maddening in the sense that a Spanish-language game show turns awkward when men in animal suits appear suddenly to announce bad news. “Baghdad Blues?” A little sleazy. But only a little. And it worked.

Of course, the night’s encore consisted of “Bat Macumba,” perhaps the only song around whose lyrics are even more fun to read on paper than to hear aloud, and “Panis et Circenses,” a gem in its own right. Rarely does a band radiate pure sunshine as did Os Mutantes on this night, though when you’re dressed to the nines for wizardry and space travel, it’s only fair that your vibe matches your look, right?