The Mentalist: The Complete First Season and more 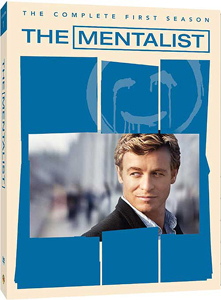 “Rome” creator Bruno Heller is the force behind the breakout hit “The Mentalist.” After his wife and child are murdered, TV psychic Patrick Jane renounces his phony job and goes to work using his preternatural skills of psychological observation to help police catch the criminals that elude them. Meanwhile, he continues the search for his family’s murderer. The Complete First Season is currently available.

Bridging the gap between the second and third Terminator films, “Terminator: The Sarah Connor Chronicles” follows the future human resistance leader and his ass-kicking mom on the run from the law and yet another Terminator. Helping them along the way is a hot chick version of the Arnold character. The show is chock full of above average CGI and action. The Complete Second Season is now available.

Season 4 of the funniest show on TV, “It’s Always Sunny in Philadelphia,” is currently available. The savage comedy, billed as “‘Seinfeld’ on crack,” follows three unscrupulous bar owners and their scheming elder statesman (Danny DeVito) in their misadventures.

Jeff Goldblum and Willem Dafoe give powerhouse performances in Paul Schrader’s Adam Resurrected. Goldblum plays a performer and Holocaust survivor who is sent to an experimental insane asylum, where he entertains the other patients. Goldblum was overlooked by the Academy for what is the role of his career. Dafoe is equally affecting as his tormenting SS officer.

Nightmare (available Sept. 29) is a low budget horror film about a film student who wakes up next to his one-night stand to find a camera pointed at the bed. The tape shows the pair murdering three strangers, of which they have no memory. Finding influence in David Lynch, Donnie Darko and American Psycho, the film spirals down into a series of nightmares within nightmares.

Lymelife is a quirky coming of age tale set against a dysfunctional family. The great ensemble cast includes Alec Baldwin, Timothy Hutton, Cynthia Nixon and not one, but two, Culkins. Funny and touching, it’s based on first-time director Derick Martini’s life growing up on Long Island during the ’70s.

The Truth Is Out There

Touted as “the first Internet blockbuster,” Loose Change 9/11 is the most prominent of the 9/11 conspiracy films, with a cult of dedicated followers. Since its original release, we’ve seen two updated versions, with this being the third. Subtitled “An American Coup,” the film builds a case using eyewitness reports, testimony from experts and comparisons with similar incidents to suggest that there was no way planes alone could have brought down the towers. Several possible motives for an American-based conspiracy are posited from rampant insider trading to carte blanche justification for war.

By no means definitive, the film does raise some very compelling questions. But regardless of one’s opinion on the matter, what is most disturbing is the silencing of dissention that followed the attacks.

“Ghost Hunt” is like an anime Ghostbusters. The series follows a nescient psychic as she joins a group of mediums and monks to investigate otherworldly phenomena and vanquish evil. The Complete Series is now available.

Wolverine takes center stage in X-Men Origins: Wolverine. Directed by the unlikely Gavin Hood (Tsotsi), the film centers on the irascible antihero’s birth through the military’s secret Weapon X program, and his blood feud with nemesis Sabertooth, played by the equally unlikely Liev Schreiber. Also making appearances are Deadpool (Ryan Reynolds), Gambit and Cyclops. The film’s departures from the source material are sure to enrage diehards, but the casual fan still looking for some summer blockbuster action will be entertained.