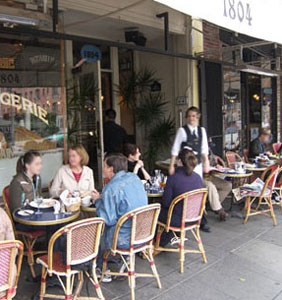 One night at the ArcLight after walking to my car with a friend, I noticed a flyer on the windshield. I picked it up and immediately burst into laughter. It was an advertisement for something called the Tragical History Tour (dearlydepartedtours.com).

This sightseeing romp through Los Angeles focuses on 100 percent Hollywood Babylon – that is, all the scandals, lore and sheer craziness that make this town awesome. For a mere $40, you’ll spend three hours journeying through historic spots such as the street where actor Hugh Grant got busy (and later arrested) with a hooker named Divine Brown. They’ll also take patrons to the “last gasp” locations of celebrities such as River Phoenix, Michael Jackson and Frank Sinatra.

There are several other offerings such as the Helter Skelter Tour, which is a three-hour exploration of the most grisly Manson family murder sites in California history. Sure, it’s all a bit macabre, but that’s part of what makes it so cool.

Have you ever watched a movie and noticed your favorite coffee shop or the first apartment that you lived in when you moved to Los Angeles? I love pointing out to friends all the cool places that they seen in films during visits here. It’s gotten to the point that many of them have taken to e-mailing me ahead of time, informing me that they’re bringing a boyfriend or girlfriend or roommate with them, and they’ll want to enjoy a trek through these areas.

My shortlist is a good one: Made of Honor, starring Patrick Dempsey as Tom and Michelle Monaghan as Hannah, had a ton of scenes shot right here in Los Angeles. Even though the film was based in New York City, you’ll notice the bakery where Tom and Hannah satisfy their cake cravings was actually shot at Figaro Bistrot (1802 N. Vermont Ave., Los Angeles; figarobistrot.com).

Figaro has tasty, well-priced French food and a fun outdoorsy, people-watching vibe. I even saw Bruce Willis dining here years ago with a former ladylove. For all you shopaholics out there, you’ll also recognize Squaresville vintage store (1800 N. Vermont Ave., Los Angeles) in the background.?

Does Anna Faris tickle your funny bone? Well, see the Zeta sorority’s abode from The House Bunny up close and personal by driving to 2151 W. 20th St., Los Angeles. This West Adams craftsman house is where Faris’ Shelley burned her legs to a crisp over a steamy manhole while trying to attract Oliver (Colin Hanks).

Yes Man starring Jim Carrey and Zooey Deschanel was another comedy filmed on location in Southern California. Not only did Big Foot Lodge (3172 Los Feliz Blvd., Los Angeles; bigfootlodge.com) figure prominently in many of the movie’s scenes, but so did Spaceland (1717 Silver Lake Blvd., Los Angeles; clubspaceland.com). This club was the backdrop for Deschanel’s hilarious band, Munchausen by Proxy. In real life, it has launched the careers of many of the coolest acts of today, including the Walkmen and Silversun Pickups. Spaceland was also featured in 2005’s Shopgirl, starring Claire Danes and Jason Schwartzman.

The Griffith Park Observatory (2800 E. Observatory Ave., Los Angeles; griffithobs.org) has long been a favorite of moviemakers. It has been seen in countless movies from the James Dean classic, Rebel Without a Cause, to Charlie’s Angels 2: Full Throttle. Now that it’s been remodeled, it’s even more exciting for those who love to stargaze in style.

Finally, if you’re a fan of rock ’n’ roll and sentimental period pieces, you’ll definitely want to stop by the Hyatt (8401 W. Sunset Blvd., West Hollywood; westhollywood.hyatt.com). This is where many fan scenes from Cameron Crowe’s Almost Famous took place.