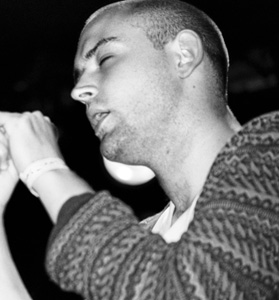 Sandwiched as the meat in a marvelous all-Scottish lineup consisting also of Frightened Rabbit and We Were Promised Jetpacks, the Twilight Sad recently held their second supporting slot at the Knitting Factory since 2007. Two years prior, the venue’s poor sound had interfered a touch with an otherwise fantastic set, and vocalist James Graham, like an unsocialized child, sat and huddled with his beer to skip out on the instrumental parts of songs that didn’t require his talent.

At 25, he’s a more confident performer, still primarily facing stage right when he sings, but when not needed, standing upright and staring down his audience with piercing eyes and an almost frighteningly-confrontational spirit. Graham’s vocals are strong, his performance of “Cold Days From the Birdhouse” matching those of the alternate version that appears on the Here it Never Snowed. Afterwards it Did. EP, his beautiful brogue allowing for thickly rolled arrrs all over “I Am Taking the Train Home.”

All the while, Andy MacFarlane played his gorgeous cream Jaguar almost fully with his tremolo bar, as a poker-faced Craig Orzel strummed his bass, the pair creating a dense wall of ringing noise from opener “Reflection of the Television” forward. They seem a touch happier these days, somehow, and even with the fifth member they’ve added, Martin Doherty (formerly) of Aereogramme, all members are so incredibly necessary, each adding his own beautiful noise.