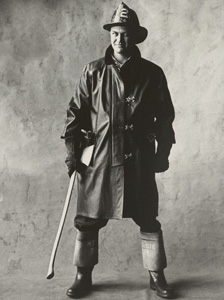 Earlier this year, I interviewed Mark the Cobrasnake. For those of you who aren’t raging club junkies, he’s the photographer for Steve Aoki’s Dim Mak empire. Aside from being a very cool guy, his love of capturing images really left a lasting impression on me. Sure, I’ve known and worked with some of the finest shooters out there, but it’s always nice when someone behind the scenes is still excited about the work.

How does one go about finding fun places to check out the best pictures? I mean, with all the movie events and fashion stuff constantly going on, other art forms can get lost. Well, I’ve found a few really cool photo exhibits coming up soon.

Photographer Irving Penn once took a nude photograph of supermodel Kate Moss so beautiful that it was projected to sell for nearly $50,000 at auction. Sure, Ms. Moss is a hottie, but Penn is just that good. If you’re curious about this enigmatic photographer then you’d be wise to check out his exhibit of blue collar workers at the Getty (1200 Getty Center Drive, Los Angeles; getty.edu).

Through Penn’s lens, these skilled tradespeople get their due, being immortalized by some of the greatest eyes this world has known. Even more astonishing is the fact that every single person in the exhibit was shot over half a century ago in the 1950s. Penn’s collection will be shown through Jan. 10, 2010.

Tea is the new coffee, so screw all you Starbucks junkies. An exhibit that wishes to usher in this new trend is Steeped in History: The Art of Tea (which is currently on display through November at the Fowler Museum at UCLA’s North Campus (fowler.ucla.edu).

This exhibit is a close look at one of my all-time favorite things to curl up to, which is a steaming hot cup of Sleepytime. There are photos as well as other forms of art that show all kinds of folks enjoying tea time in exotic and metropolitan locales.

If you’re an anglophile or a hillbilly with a love of “Southern house wine” then you’ll be into this one – big time. He was a winner of the prestigious Guggenheim grant who went on to capture Americana like no one else. Swiss-born photographer Robert Frank took to the road – by car – in 1955 and shot everything he saw using nothing more than a hand-held Leica camera.

Think of it as the photographic answer to what Kerouac and the Beat poets were doing back in their heyday. These pictures have now become a moment in our history at a time in which very few of us were alive. Frank’s work, “The Americans,” can be seen through Oct. 19 at MOCA (152 N Central Ave. Los Angeles; moca.org).

When I was two, I remember my parents rushing me, in the rain, to have my picture taken at Sears when we lived in D.C. It’s one of my very first memories. I can recall the photographer placing my hands neatly in my lap – my blue dress soaked with water and my favorite red cowboy boots dangling against the partition holding my booster seat. It was a truly funny moment. I’m sure kids who grew up in Los Angeles have similar moments to mine that may have been captured with a bit more spontaneity.

Pasadena’s Armory Center for the Arts (145 N. Raymond Ave., Pasadena; armoryarts.org) is holding an exhibit of its 20-year Artful Programs history. Anyone who has taken part in an activity there could very well show up within the selected photos. This is a great way to look back on one’s childhood and to celebrate the armory’s artful past.

Finally, are you a water baby down to your very core? Does your love of coral reefs and the life aquatic haunt your daydreams? If so, then you may be just the person the L.A. Underwater Photographic Society (laups.org) is looking for. This club and its members take to the Pacific to shoot some of the craziest sea life imaginable.

Recent “shootouts,” or underwater dives, ran roughly $115, but membership fees are super low. They range from $15 to $45. The best works are eligible for competition and are even displayed on the club’s Web site.

Fun for Less
Fun on a Budget: The Hollywood Way!
2,802 views

Fun for Less
Dollars and Scents: Fab Fragrances Under $20
3,807 views

Fun for Less
Getting Hitched For Mere Cents
2,103 views
bid=||