Drag Me To Hell and Away We Go Are Released 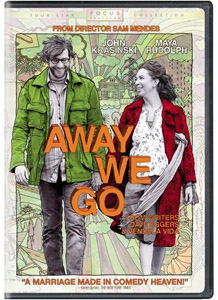 The Horror! The Horror! Halloween is almost upon us, and the horror DVDs are rolling in.

Evil Dead fans rejoice: Sam Raimi’s triumphant return to horror, Drag Me to Hell, comes to DVD and Blu-ray. His longtime collaborator and brother Ivan also had a hand in the script. When a loan officer (the perpetually-16 Alison Lohman [actually 30]) evicts on elderly woman, a curse is placed on her in which the forces of evil fight for her soul. Raimi uses typically bravura camera tricks and an experienced hand to draw out the tension, while throwing in some of his trademark blackly comic gore. Justin Long (Dodgeball) co-stars.

Terry O’Quinn, “Lost”’s John Locke, gives a Spirit Award-nominated performance in the cult classic The Stepfather. The late Donald E. Westlake, author of the Parker novels, provided the intense script, based on a true story. O’Quinn plays a man in search of the perfect suburban life. But his new stepdaughter suspects something sinister in him. Director Joseph Ruben (The Forgotten) provides a commentary track. The remake hits theaters Oct. 16.

SyFy channel’s remake of the 1984 Stephen King adaptation, Children of the Corn, comes to DVD. When a couple is stranded in the middle of nowhere, they find a cult of children who have murdered the town’s adults and worship an evil presence in the cornfields. The DVD includes unrated scenes not shown on TV.

J. Lee Thompson, director of the classic Cape Fear, helmed the early slasher favorite Happy Birthday to Me (1981). A new student joins the popular clique at school just in time for her 18th birthday. But her friends start turning up grotesquely murdered (shish kebab, anyone?). John Saxton, writer of such cult classics as Class of 1984 and Ilsa, She Wolf of the SS provided the fun script.

Stranger Than Fiction: History Channel explores some real-life horrors in the Haunted Histories Collection. The 20-disc megaset examines in depth various supernatural phenomena, from haunted houses to voodoo zombies. The history of Halloween, including the origins of its traditions, is the subject of one episode. Others explore the Salem Witch Trials, the legends of vampires, actual exorcisms, Dracula (a.k.a. Vlad the Impaler)’s family tree and several infamous haunted locations, from Chicago’s lakefront to D.C. and Hawaii. It’s an entertaining and educational set for believers and skeptics alike.

Funny Business: If you’re looking for an antidote to the barrage of gore, check out “SNL” alumna Maya Rudolph and John Krasinski (“The Office”) in Away We Go, a quirky road comedy about a pregnant couple looking for the perfect place to settle. It’s a refreshing departure for the dour Sam Mendes, scripted by Dave Eggers and wife Vendela Vida. The terrific supporting cast includes Jeff Daniels, Catherine O’Hara and Maggie Gyllenhaal.

Made in Japan: D. Gray-Man: Season Two, Part One. Allen Walker is a young exorcist. Cursed with an eye that sees evil and an arm for slaying demons, Allen is humanity’s only hope against the mounting forces of evil.

The Story of Saiunkoku: The Complete Season One is the story of a philandering emperor and the girl who wants to conquer sexism and attain a government job. The deal: If she can make the emperor respectable, she can have her dream.

One Piece: Season Two, Third Voyage is a fun series about a group of pirates known as the Straw Hats and their wild adventures.