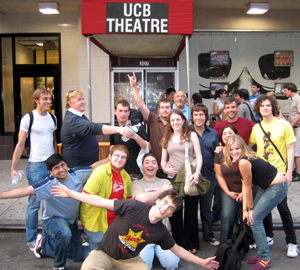 Upright Citizens Brigade Theatre is a hotbed of outrageous talent.

It just keeps coming: More news outlets are reporting that this recession is getting stronger. They need to call it what it is: an economic depression. However, until that happens, one thing is certain. Now, more than ever, folks need laughter in their lives.

Go to a movie theater, and you’ll see long lines waiting to dive into the latest comedy. Escapism is here to stay.

However, if you’re looking for a giggle without having to come out of pocket as much as you might at the Grove or the ArcLight, then it might be time for a change of venue. Comedy clubs and theaters are a wonderful way to discover new talent. Los Angeles is a hotbed of outrageously talented men and women who are hellbent on making you laugh.

In the mid-1990s, “Saturday Night Live”’s Amy Poehler founded the Upright Citizens Brigade Theatre (5919 Franklin Ave., Hollywood; ucbtheatre.com), with her friends and castmates from a show of the same name. This school has gone on to turn out some of the most wildly amusing comedians in America today.

“Parks and Recreation” stars Aubrey Plaza and Aziz Ansari have studied here. The theater is also the proving ground for many of “SNL”’s best players. But the most glowing recommendation for the space is its improv and sketch comedy shows.

On any given night, you will be able to catch stellar performances that you’ll still be talking about weeks later. I’m personally a huge fan of “The Txt Msg Show.” This is where improv comedy is created and performed – on the spot – from text messages found on audience members’ phones. Genius.

The great thing about UCB is that it’s extremely inexpensive to get in; most nights are a mere $5. However, it might be a good idea to make reservations, as word of mouth has caused many of the theater’s more popular offerings to sell out in advance.

Another Hollywood spot that has been influencing the local comedy scene is Improv Olympic (6366 Hollywood Blvd., Los Angeles; iowest.com). This world-famous theater is located in the heart of it all – just a stone’s throw from Cinespace and Geisha House.

It’s where irreverent talents such as Andy Dick and the duo Frangela go to do their thing. I.O. offers up a ton of different experiences for every taste imaginable. If you’re into sketch comedy, this place has you covered. Want the beauty of an instant punchline? Then you’ll love much of the stand-up that goes down nightly. But if you’ve always been a fan of the house specialty, then you’ll love scarfing down any of the fine improv nights.

Five bucks will get you access to most of the evenings’ festivities. Just a word of caution: Parking in this area can be nightmarish, so plan on a long search for a meter.

When I first arrived in Los Angeles, my main goal was to meet as many people as I could, while pursuing my dream of being the next big funny lady. I immediately set my sights on the historical Groundlings Theater (7307 Melrose Ave., Los Angeles; groundlings.com).

The Groundlings is the place where many of the top names in comedy and the film industry got their start. Keanu Reeves once studied here, as did actor Dax Shepard. Even “SNL” star, Kristen Wiig (Target Lady) is an alum of this space.

You’ll find all kinds of humor here, but in my opinion, nothing beats the Sunday troupe. This is the squad of men and women who put to the test all the skills taught in the classes that the school holds.

Still, if you’re not comfortable getting your kicks in Hollywood, or if you’re a beach dweller, then you might want to frequent a place a little closer to home. For you, I recommend the Westside Comedy Theater (1323-A 3rd Street Prominade, Santa Monica; westsidecomedy.com).

WCT has an excellent learning facility that teaches everything from sketch to voiceover to improv. Classes are free if you intern. Performers such as Margaret Cho and even director John Landis have come here to unleash their awesome projects.

But the real draw is Mission Improvable, the theater’s house troupe. Since the space is located in Santa Monica, there’s always plenty of parking around the promenade – most of which is a mere $3 after 6 p.m. And the shows here are usually no more than $5 to $8.

Fun for Less
Fun on a Budget: The Hollywood Way!
2,820 views

Fun for Less
Dollars and Scents: Fab Fragrances Under $20
3,829 views

Fun for Less
Getting Hitched For Mere Cents
2,124 views
bid=||