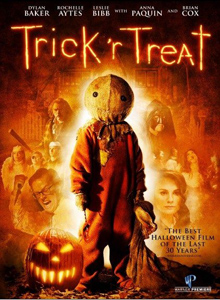 Have You Seen? Looking for some Halloween flicks besides The Exorcist? Check out these lesser-seen classics:

The Thing: Kurt Russell stars in John Carpenter’s remake of the Howard Hawks film. In a remote Arctic outpost, a shape-shifting alien life form kills a team of scientists one by one. Creature gore ensues.

The Changeling: George C. Scott stars in this classic take on the haunted house from director Peter Medak (The Ruling Class).

The Descent: A group of women goes spelunking and gets lost deep within the earth – only to discover that they’re not alone. It’s one of the tensest movies in recent memory.

Funny Business: Need an antidote to all the horror? Check out Saturday Night Live: The Best of Amy Poehler. The “Parks & Recreation” star cut her teeth in sketch comedy, first with Upright Citizens Brigade then on “SNL.” She is probably the funniest cast member since Will Ferrell. This collection features Poehler’s take on Hillary Clinton, highlights as co-anchor of Weekend Update alongside Tina Fey, as well as her hyper active little girl, Kaitlin, and the Genital Herpes commercial with Alec Baldwin.

Just For Laughs: Launching Pad features some of comedy’s biggest names in the performances that helped launch their careers at Montreal’s International Comedy Festival. Featured are: Jon Stewart, Flight of the Conchords, Rowan Atkinson, Dave Chappelle, Ray Romano and more.

The Truth Is Out There: From the directors of Darkon comes a fascinating documentary. New World Order provides an evenhanded look at conspiracy theorists, focusing on cult hero and radio host Alex Jones. Pointing to a 9/11 inside job, the Bilderberg Conference and JFK’s assassination, these theorists seek to expose the global conspiracy of the Power Elite to disrupt the world economy and reestablish a New World Order.

The Idiotbox: “Numb3rs” remains a surprisingly entertaining show in its fifth season. The drama follows two brothers, one an FBI agent (Rob Morrow), the other a brilliant mathematician (David Krumholtz). Together they combine complex mathematics and pattern recognition along with traditional crime solving techniques to break the toughest cases. Judd Hirsch and Peter MacNicol round out the solid supporting cast.

Blu Notes: Oliver Stone’s most controversial film, Natural Born Killers, comes to Blu-ray in a 15th Anniversary Director’s Cut. Originally a script by Quentin Tarantino, Stone’s satirical vision bares little resemblance to its source, instead using the story of two murderous lovers to skewer media violence. The result is an assault on the senses, a hallucinogenic Bonnie and Clyde for the MTV generation. The Blu-ray comes loaded with bonus features.