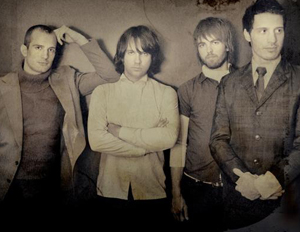 Mutemath could quite possibly be one of the most underrated bands on the planet, and anyone who witnessed one of their recent tour stops would completely agree. The New Orleans-foursome appeared in a fit of lights under a giant arch mimicking the cover of their latest album, Armistice. At that very moment, it was on.

The band rifled through a majority of their two full-length albums, switching their instruments from song to song as if they were going out of style. They hit all the notes with unparalleled tightness as they dished out extended versions of “Electrify,” ”Backfire,” “Typical,” “Noticed” and “Plan B.”

Their two-hour set ended with an encore that started off with one of their slower but equally amazing tracks, “Pins and Needles.” From there, it was time for the crowd pleaser “Spotlight,” that was featured on the Twilight film soundtrack.

Instead of taking the standard bow, lead singer and keyboardist Paul Meany hurled a bass drum into the crowd then managed to somehow stand atop of it as fans moved him about – a picturesque ending to an incredible night.