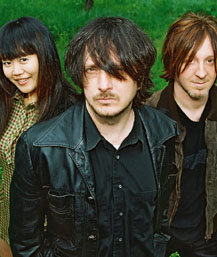 It’s rare to show up to a gig with more than one band on the bill and not be bored to tears by the first act. Once or twice in my hundreds of shows attended, an opening band has actually horrified me. The potential to be totally blown away by the opener is infinitely smaller, but on March 10 at the Galaxy, in Santa Ana, Rayon accomplished just that.

The near sellout crowd had come to this strange venue in an Orange County business park to see Ian Hunter of Mott The Hoople. They were aging rock fans, a mostly male and generally forgotten demographic, the sort you figure were probably attending new wave shows 20 years ago.

The fans wear less black these days but they are no less enthusiastic, and tonight Rayon was, in their best estimation, amazing. People who had never heard of the band turned up at the merch booth raving, then bought all the EPs the band had with them, not to mention most of the T-shirts. Inevitably, I heard comparisons like Echo and the Bunnymen and The Who from awed audience members – both of which sum up Rayon’s trippy style of melodic retro-rock.

The reason I am relaying this information to you via the reaction of middle-aged audience members is because I’m a little biased. I can’t say that March 10 was the first time I’d seen Rayon play. Walter Ensign and Mimi Star, singer/guitarist and bass player, respectively, are both friends of mine and they play frequently around Los Angeles, lately with a revolving cast of drummers. Happily, they seem to have settled on a fantastic one at last – Brian Keats – who has hit things with sticks behind more New York- and L.A.-based bands than you’d care to count.

If Ensign and Star are mysterious by nature, Keats is slightly easier to track. A quick Google search will tell you that he once played with The Misfits, and if he looks familiar it’s probably because you’ve seen him around town backing the likes of Jason Falkner.

Having seen a number of Rayon shows, I can say that the band has never sounded better than they did at the Galaxy. Backed by Keats’ strong, refreshing drumming, Ensign and Star seemed to wield their instruments with extra muscle. Everything was tight, on time and more dynamic than usual.

The band ripped through several standards from their five-song limited edition Blow Away EP (still available at Amoeba Records and through cdbaby.com), including my favorite, the darkly shimmering “Gave You Up.” Ensign paused only briefly between songs to shake the hair out of his sunglasses and introduce the band. The rest of the time, he sang with a voice that evoked “Lucy in the Sky with Diamonds”-era Lennon, or curved his body around his guitar, crafting the layers that make Rayon sound like anything but a three-piece.

Star, in a miniskirt just as daunting as her big black platform boots, provided the low end with plenty of rockstar attitude. According to Rayon lore, Star once submitted a tape of her playing to Courtney Love when the mercurial woman was looking for a new Hole bassist.

On this night, Rayon closed their set by debuting two new songs that are more up-tempo and rocking than their older material. They also have another great new tune in their arsenal called “It’s OK,” not played on this night, which is getting airplay on Indie 103.1.

Blow Away is currently available. For more information, visit www.rayonmusic.com.